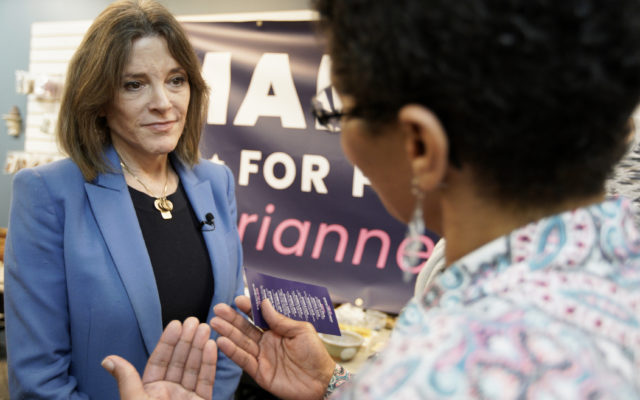 Democratic presidential candidate and author Marianne Williamson talks to a supporter during an election stop at the Next Millennium Books & Gifts store in Omaha, Neb., Tuesday, Nov. 19, 2019. (AP Photo/Nati Harnik)

Democratic presidential candidate Marianne Williamson has laid off her entire campaign staff, her former New Hampshire state director Paul Hodes confirmed to CBS News. But Williamson is not expected to completely exit the race — at least, not yet.

“To the contrary,” Hodes said in a telephone interview. “My understanding is that she plans to continue.”

Williamson appeared at the first Democratic presidential debates over the summer, but failed to meet the fundraising and polling thresholds to appear at later exchanges. She has not qualified for the January 14 debate in Iowa.

Williamson is an author who has dismissed characterizations of her as a “spiritual guru,” telling Major Garrett on “The Takeout” podcast earlier this year that referring to her in this way is “dismissive” and makes her seem “like I’m a less intelligent thinker, a little woo-woo.” Instead, she argued that her emphasis on spirituality is what made her a strong and viable presidential candidate. Williamson, who made some of her personal income off spiritual renewal and self-help books, has made a mark in the crowded Democratic field with her unique phrasing and messaging.

News of the Williamson campaign layoffs come the same day other Democratic contenders announce their fundraising figures from the fourth quarter of 2019, and as former Housing and Urban Development Secretary Julian Castro announced he’s dropping out of the race.

Williamson ran a campaign that largely declined to criticize her Democratic opponents, instead highlighting the need for unity and kindness.

— Kathryn Watson and Caitlin Huey-Burns contributed to this report.