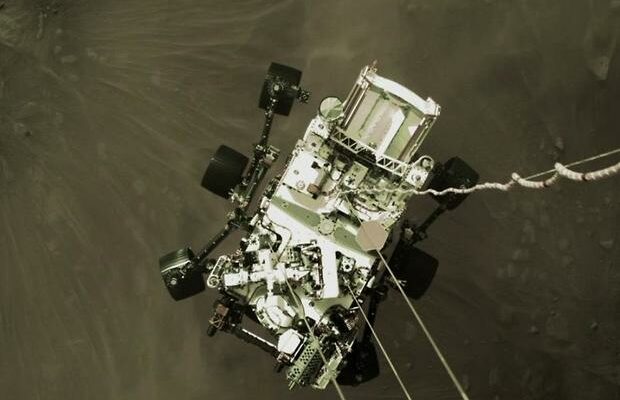 A view of the Perseverance rover taken from above by a camera on its rocket-powered descent stage as the six-wheel robot was lowered to the surface of Jezero Crater. The rover was about six feet off the ground when this photo was taken. NASA/JPL-Caltech
Excited engineers unveiled “fantastic” new pictures from the Perseverance Mars rover Friday, including a dramatic shot from above showing the six-wheel robot being lowered to the surface of Jezero Crater by its rocket-powered backpack.

Another picture, this one taken by the Mars Reconnaissance Orbiter as it flew over the landing site during the rover’s descent Thursday, showed Perseverance’s flying saucer-shaped aeroshell suspended below the rover’s parachute against the backdrop of Jezero Crater.

The first color picture from the surface also was displayed, courtesy of a hazard-avoidance camera, or “hazcam,” mounted just below the body of Perseverance showing a crystal clear view of the rubble-strewn ground where the rover touched down.

For Adam Steltzner, chief engineer of the Perseverance mission and the man who managed the Curiosity rover’s descent to Mars in 2012, the image of Perseverance suspended from above was nothing short of inspirational.

“The team is overwhelmed with excitement and joy to have successfully landed another rover on Mars,” he said.

Showing off iconic pictures from past space triumphs, from astronaut Buzz Aldrin standing on the moon, to the Hubble Space Telescope’s “Pillars of Creation” and a spectacular image of ringed Saturn, Steltzner said, “We can only hope … that we might be able to someday contribute yet another iconic image to this collection.”

“I’m hopeful that today we can with this,” he said, unveiling the shot of Perseverance from above. “There are these fantastic images that we’ve had a chance to take and are still getting down from the surface … and we will hopefully be able to see them in the days coming.”

The final leg of the trip, and by far the riskiest since launch, was the seven-minute descent from the top of the Martian atmosphere to the floor of Jezero Crater using a supersonic parachute, new hazard avoidance systems and the rocket-powered descent stage that lowered the rover to touchdown.

“I’m happy to say the rover is doing great and is healthy on the surface of Mars,” said Pauline Hwang, assistant strategic mission manager.

The dramatic “sky crane” maneuver put Perseverance on the surface in a region known as Canyon de Chelly, just beyond a broad delta formation fanning out from the edge of Jezero Crater. The delta is made up of deposits brought in by a river that once cut a channel in the crater’s rim.

Perseverance will study deposits on the floor of Jezero and the delta, collecting rock and soil samples that might reveal the presence of “biosignatures,” remnants of past microbial life. NASA is working with the European Space Agency on plans to retrieve the samples late this decade and return them to Earth for analysis.

“To say that the the Perseverance science team is excited for this rover to be safely on Mars is an understatement,” said Katie Stack Morgan, deputy project scientist. “We’ve been waiting years for this moment. And we’re finally here.”

But first, engineers plan to spend several weeks activating the rover’s communications systems, upgrading its computer software, checking out its science instruments, unlimbering and testing its robot arm and releasing a small helicopter to test the feasibility of flight in the thin martian atmosphere.

Over the weekend, engineers plan to erect Perseverance’s remote sensing mast so high-resolution cameras can capture panoramic views of the rover’s upper body and its immediate surroundings in Jezero rater. The software upgrade, a four-day process, is expected to be carried out later next week.

In the meantime, new pictures from the rover’s dramatic descent and possibly video are expected by Monday when NASA plans another news briefing.