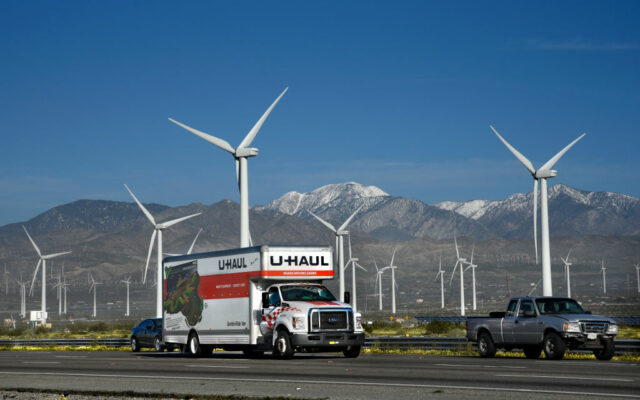 PALM SPRINGS, CALIFORNIA - FEBRUARY 27, 2019: A U-Haul truck and other vehicles travel along Interstate 10 as wind turbines generate electricity at the San Gorgonio Pass Wind Farm near Palm Springs, California. Located in the windy gap between Southern California's two highest mountains, the facility is one of three major wind farms in California. (Photo by Robert Alexander/Getty Images)

Well, the physical move itself is getting pricier.

KSEE-TV reported that truck rentals from major companies like U-Haul and Penske cost about $2,500 more from California to Austin than rental from Austin to California.  For Budget, that difference was more than $3,000.

The TV station looked at trips from Fresno to Austin for February 27th and what it would cost to rent a 10-foot box truck from U-Haul, Penske, and Budget.

The reason for the difference?  The companies told KSEE-TV it’s all supply and demand, as Penske explained in a statement:

Penske Truck Rental currently has more customers leaving California than moving back into California, which has been consistent throughout the pandemic period. This has caused a fleet imbalance due to the lack of return flow of rental trucks back into California. Thus, Penske ends up with an over-supply of trucks in Texas and not enough trucks in California.