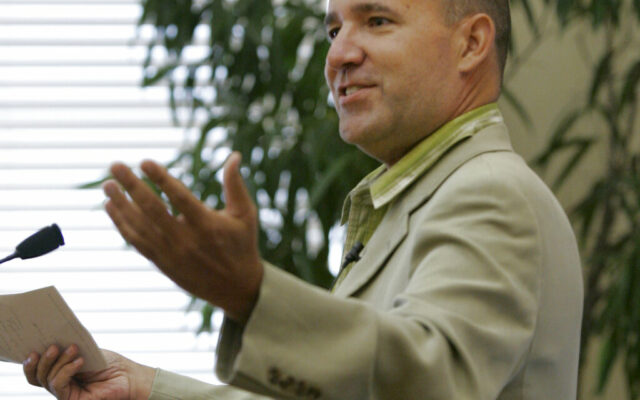 In this Sept. 2, 2009 file photo, Matthew Dowd, chief campaign strategist for the Bush-Cheney 2004 presidential campaign, speaks at the University of Arkansas Clinton School of Public Service in Little Rock, Ark. Dowd announced Wednesday, Sept. 29, 2021, that he will run as a Democrat for Texas lieutenant governor. (AP Photo/Danny Johnston File)

In a statement, Dowd says that at the time he filed for the race in September there was only one other candidate — incumbent Dan Patrick — and he, like Dowd, is a white Christian man.

“A diverse field is now emerging in the Democratic primary for this office,” Dowd says. “I do not want to be the one who stands in the way of the greater diversity we need in politics.”

He cited a September 2018 opinion piece that he authored for ABC News titled “Us white male Christians need to step back and give others room to lead,” in which he wrote that “instead of waiting for the diverse population of America to keep pushing and prodding, I would humbly suggest that we as white male Christians take it upon ourselves to step back and give more people who don’t look like us access to the levers of power.”

Democratic state Rep. Michelle Beckley of Carrollton announced last month she is running in the Lt. Gov. race. Mike Collier, who ran in the 2018 race as the Democrat, is also in the race.

“I was outspent 10-to-1 my first election. Nobody thought I was gonna win that either,” she said. “I’ve done it before. So I’m confident I could do it again. I wouldn’t be running if I didn’t think that.”

“I am not dropping out of politics. I will continue to speak out on democracy and help elect servant leaders with common sense and common decency who believe in the common good, up and down the ballot, in Texas and across the nation. I am in the process of converting my campaign candidate committee to a general purpose committee to support those who step forward to serve the public with integrity. I will announce the details of this next step in the new year,” Dowd said. ” I am incredibly grateful and thankful, from the bottom of my heart, for the thousands of people who volunteered and contributed over the last three months.”