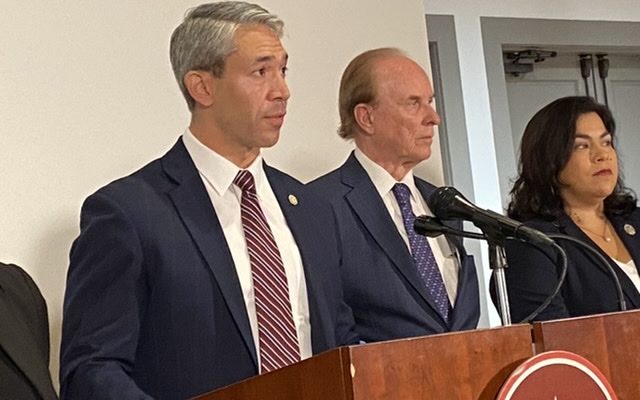 The City of San Antonio said Monday night that along with its public health emergency declaration, it sought a temporary restraining order against those under quarantine at Joint Base San Antonio-Lackland to prevent them from leaving the quarantine.

The order was filed against the federal government to prevent them from permitting those 120+ people still on the base from leaving after the quarantine is over until they are confirmed to not have the virus or complete a 28-day quarantine instead of the current 14-day quarantine.  The city’s legal action was intended to prevent the release of people Monday from that quarantine.

The federal judge ruled against the city.

Federal prosecutors argued the City of San Antonio and the State of Texas has its own legal right to impose its own mandated quarantines.  The judge additionally said it does not have the power to determine what is an appropriate medical action or not.

“The Court first finds it questionable whether it has subject matter jurisdiction. Assuming, arguendo, that this Court does indeed have such jurisdiction—under either the Administrative Procedures Act and/or 42 U.S.C. § 264—the Court finds that Plaintiffs have not shown a substantial likelihood of success on the merits. The Surgeon General of the United States and the Secretary of Health and Human Services are authorized to make and enforce such regulations as in their judgment are necessary to prevent the transmission or spread of communicable diseases. 42 U.S.C. § 264(a). In this case, they have determined that two negative tests (twenty-four hours apart) and/or quarantine for fourteen days is sufficient to prevent transmission or spread of COVID-19. This Court has no authority to second-guess those determinations even though the Court also shares the concerns expressed by the plaintiffs.
“Defendants take the position that the State of Texas, Bexar County, and/or the City of San Antonio (through its emergency-declaration powers), may have the authority to issue their own quarantine orders. The United States Government is, in effect, washing its own hands further of this quarantine. This is disappointing. Nonetheless, Plaintiffs’ motion for a temporary restraining order is DENIED.”

“Especially given the release this weekend of a patient who had to be brought back into isolation after a ‘weakly positive’ test for the virus, it is imperative that every one of the individuals at Lackland be tested and cleared before being released, as recommended by our medical community,” San Antonio Mayor Ron Nirenberg said in a statement. “If the federal government will not do the right thing in this case, the City of San Antonio will use its powers so that appropriate measures are taken to protect the community from exposure to COVID-19.”

SAN ANTONIO (KTSA News) — Mayor Ron Nirenberg has issued a State of Disaster, Public Health Emergency declaration for San Antonio amid the spread of the coronavirus.

The declaration mandates that all people under quarantine at Joint Base San Antonio- Lackland be prohibited from going into San Antonio until further notice.

The declaration comes just hours after officials revealed that a woman released by the Centers for Disease Control and Prevention released  an evacuee from China after she was cleared for the coronavirus.

She checked into a Holiday Inn near the airport and shopped at North Star Mall Saturday evening before it was determined that the results of a third test came back “weakly positive.”

The declaration authorizes the city of San Antonio to “commandeer or use any private property, temporarily acquire, by lease or other means, sites required for temporary housing units or emergency shelters for evacuees, subject to compensation requirements.”

The declaration also authorizes the city to “take any actions necessary to promote health and suppress disease,” including quarantine, regulating hospitals and regulating travel into and out of San Antonio.

Those who do not comply with the rules face fines.

The declaration will remain in effect for seven days, unless the San Antonio City Council votes to extend it.