McAuliffe urges Dems to use muscle on voting, infrastructure 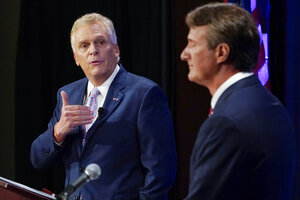 FILE - In this Sept. 16, 2021, file photo Democratic gubernatorial candidate former Governor Terry McAuliffe, left, gestures as Republican challenger, Glenn Youngkin, listens during a debate at the Appalachian School of Law in Grundy, Va. Polls suggest the race is close, adding to McAuliffe’s sense of urgency to campaign on a robust list of his party’s accomplishments. The McAuliffe campaign confirmed Tuesday that Biden and former President Barack Obama would rally voters in the state later in the month at separate events. (AP Photo/Steve Helber, File)

RICHMOND, Va. (AP) — Terry McAuliffe, the Democratic candidate for Virginia governor, on Tuesday called on leaders in Washington from both parties — including President Joe Biden — to “get their act together,” while pushing Senate Democrats to scrap the filibuster if needed to enact the party’s priorities on infrastructure spending and voting rights.

The harsh words from McAuliffe during an interview with The Associated Press come just three weeks before Election Day in Virginia. The former governor is facing Republican newcomer Glenn Youngkin in a race that represents a critical early test of the Democrats’ political strength in the first year of Biden’s presidency.

Polls suggest the race is close, adding to McAuliffe’s sense of urgency to campaign on a robust list of his party’s accomplishments. The McAuliffe campaign confirmed Tuesday that Biden and former President Barack Obama would rally voters in the state later in the month at separate events.

Despite the outside support, McAuliffe has been deeply frustrated by his party’s inability to fulfill key campaign promises since taking control of the White House and both chambers of Congress in January. In Tuesday’s interview, the 64-year-old lamented the Democrats’ inability to protect voting rights against a wave of Republican-backed legislation, but he saved his sharpest comments for the stalled federal infrastructure package.

“They all got to get their act together and vote,” McAuliffe said. Asked specifically if he was calling out Biden, McAuliffe said, “I put everybody there.”

McAuliffe’s frustration underlies a bigger concern for Democrats nationally entering the first midterm election season of the Biden presidency. The president’s approval ratings are sagging, and there are signs in Virginia and elsewhere that rank-and-file Democrats aren’t energized to vote.

A bad result for Democrats in Virginia, where former President Donald Trump lost by 10 points last fall, would likely signal a far more painful election next year, when control of Congress and dozens of governor’s offices are at stake.

But with a stalled legislative agenda in Washington, Democratic voters don’t appear excited to participate in Virginia’s off-year election — particularly with Trump no longer in office or on the ballot. Trump has endorsed Youngkin, but he has played a low-profile role in the Virginia contest so far.

“I tell Democrats: Donald Trump is desperate for a win here,” McAuliffe said. “If Glenn Youngkin wins, it’s a win for Donald Trump, and you’re going to begin his political comeback.”

In the interview, McAuliffe waded into the high-stakes debate over Senate rules that allow the minority party to block legislation that doesn’t muster at least 60 votes, a process known as the filibuster. Biden said last week that Democrats are considering a change to the filibuster rules in order to quickly approve lifting the nation’s debt limit and avoid what would be a devastating credit default.

On the debt limit, voting rights and the infrastructure package, McAuliffe said Democrats should do “whatever it takes to get it done.”

“They got to get their work done. People are counting on them. Do your job. I don’t care what you call it or what mechanism you use,” he said. “I’m for doing whatever the Senate has to do to pass meaningful legislation that will move this country forward.”