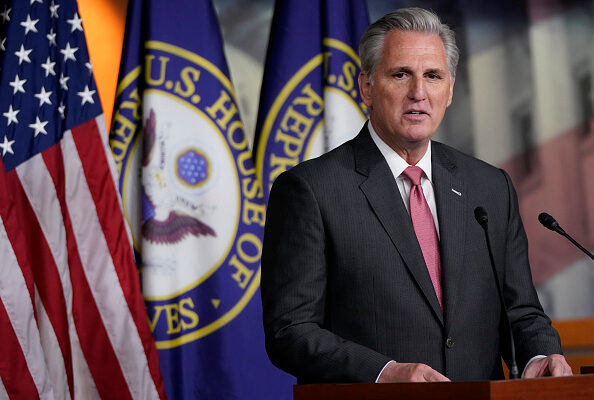 WASHINGTON, DC - JANUARY 09: House Minority Leader Kevin McCarthy (R-CA) answers questions during a press conference at the U.S. Capitol on January 09, 2020 in Washington, DC. McCarthy answered a range of questions related primarily to the House articles of impeachment being sent to the U.S. Senate. (Photo by Win McNamee/Getty Images)

House Speaker Kevin McCarthy confirmed that he has an accepted an invitation from President Biden to meet and discuss a solution to addressing the debt ceiling.

The White House has previously said there would be no negotiations with Republicans on the debt ceiling, that there must be a clean increase to the debt limit, that is, without conditions attached.

Still, White House press secretary Karine Jean-Pierre said in a briefing Friday that the president “is looking forward to meeting with Speaker McCarthy” about the debt ceiling.

“President Biden: I accept your invitation to sit down and discuss a responsible debt ceiling increase to address irresponsible government spending,” McCarthy tweeted Friday afternoon. “I look forward to our meeting.”

Treasury Secretary Janet Yellen announced the country reached its borrowing limit on Thursday, and estimated the federal government can use “extraordinary measures” to avoid a crippling credit default until about June.

Senate Minority Leader Mitch McConnell said this week he believes the debt ceiling will have to be addressed in the first half of this year.