McIlroy shoots 62 to take an early lead at the Travelers 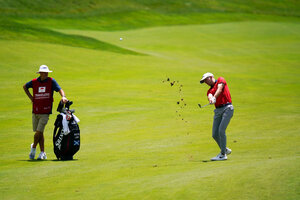 Martin Laird, of Scotland, hits on the 18th hole during the first round of the Travelers Championship golf tournament at TPC River Highlands, Thursday, June 23, 2022, in Cromwell, Conn. (AP Photo/Seth Wenig)

CROMWELL, Conn. (AP) — Rory McIlroy shot an 8-under 62 Thursday to take an early one-stroke lead on the opening day of the Travelers Championship.

The No. 2-ranked player in the world, fighting off a sinus bug, started on the back nine at TPC River Highlands and shot a bogey-free round. That included a 47-foot birdie putt on the par-4 seventh that helped him move past Xander Schauffele and Martin Laird, who each shot 63.

“It’s like U.S. Open rehab coming here,” said McIlroy, who won the Canadian Open this month and tied for fifth last week at The Country Club in Brookline. “I like coming here the week after the U.S. Open, it sort of gives you an opportunity to shoot low scores and get after it.”

Schauffele hit all 18 greens in regulation for the first time in his career, despite showing up late at the practice range because he thought his 7:35 a.m. tee time was at 7:50.

“That was a pretty big rookie move on my behalf,” the Olympic gold medalist said. “But when I’m at home, I’ll show up for an eight o’clock tee time at 7:55, maybe hit two putts and then start swinging. So, take advantage of the youth, I guess.”

Charles Howell III and Webb Simpson, who played with McIlroy, were two shots off the pace after shooting 64.

“We kind of fed off each other,” Simpson said of McIlroy. “The holes started looking bigger and bigger. A lot of putts were made.”

The world’s top-ranked player, Scottie Scheffler, was among those playing Thursday afternoon.

There were no withdrawals Thursday after several earlier in the week. Those include Justin Thomas, who bowed out Wednesday to rest an ailing back, and Brooks Koepka, who this week became the latest player to defect to the LIV Golf series.

McIlroy, who has been an outspoken critic of those leaving for the Saudi tour, said he’s not feeling any pressure this week to be an ambassador for the PGA Tour.

“I’m in a good run of form; I’m playing well,” McIlroy said. “Whether that gives me a little more confidence to speak up on certain issues, maybe. But, I’m just going out there and trying to play my game and try to win some more tournaments.”