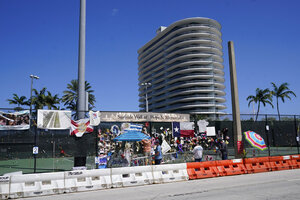 FILE - In this Aug. 30, 2021, file photo, staff with the HistoryMiami Museum work at the site of a memorial wall honoring the victims of the nearby deadly building collapse on June 24 that killed 98 people in Surfside, Fla. The museum is working with the city and county to catalog the items and preserve them in an archival bin for safekeeping. The fight over whether the site of June's deadly Florida condominium collapse should be sold for development or turned into a memorial boiled over during an emotional court hearing Thursday, Sept. 23, 2021, with some victims' relatives begging for time to find a buyer who won't put a new luxury high-rise there. (AP Photo/Lynne Sladky, File)

The fight over whether the site of June’s deadly Florida condominium collapse should be sold for development or turned into a memorial boiled over at a court hearing Thursday, with some victims’ relatives begging for time to find a buyer who won’t put a new luxury high-rise there.

Several victims’ relatives said the Surfside site where the 12-story Champlain Towers South once stood is hallowed ground. They pleaded with the judge overseeing the land’s sale to let them find a private party or government that would buy the two-acre beachfront lot at its approximate value of $150 million and donate it for a memorial to the 98 who died.

Rabbi Lisa Shrem told Miami-Dade Circuit Judge Michael Hanzman that only part of an arm bone was recovered from her 54–year-old sister, Estelle Hedaya, meaning the rest of her was either lost in the debris that was carted away or is still mixed in the dirt at the site. The land should not be developed, Shrem said.

“That is sacred land,” said Shrem, one of about a half dozen family members who spoke against development. “Our hope is that we can come to a resolution where we can sell the land, have everybody paid out who needs to be paid out and have a memorial. Please, we beg you, allow us some time.”

Hanzman expects about $1 billion in death and property claims to be filed. He said if the property sells for $150 million, combined with $50 million in insurance payments, that $200 million will only cover a fraction of the claims. He has a team of lawyers investigating whether third parties can be identified as committing negligence leading to the June 24 collapse and sued to bring in more money. No cause has been identified, but the building had a long history of problems.

Hanzman said he is sympathetic to those who want a memorial, but his job is to get the most money for all families of those who died and the approximately 35 families who survived but lost their homes. He has scheduled the auction for late February or early March and said that date is firm because many of the survivors need money to buy new homes.

He said possible sales and land swaps with government entities and others have been explored, but none have panned out and he doesn’t expect any will.

“I would have loved to have seen a memorial at this site while at the same time we provided fair market value for the victims,” he said. “It is time to realize that land is going to be sold.”

He said he understands emotions are high. But he added those relatives and others who have called the land’s potential buyers “greedy” and vowed to challenge development will lower the bids and financially harm themselves and others. He wants that stopped.

“It is one thing to make an effort to get a memorial and to explore those avenues, and it is another thing to go a step further … and make statements that this property is not buildable, that the developers are vultures and that lawyers are colluding with them to steal the money from the victims,” Hanzman said. “I know that is going to devalue the asset.”

Other families said during the hearing that they support the property’s sale and want the memorial built elsewhere. If the property is developed, there are proposals to build the memorial at a nearby park or by converting a side street adjoining the site.

Elena Pazos lost her 55-year-old husband, Miguel Pazos, her 23-year-old daughter Michelle Pazos and her daughter’s best friend, Anastasia Gromova, 24, in the collapse. She said she never wants to go onto the site because that will only reopen her wounds.

“Every time we would come there, we would remember how they died,” Pazos said. Instead, she wants the memorial nearby but private. “I want to concentrate on how they lived, how they were, where they were born, where they grew up, where they fell in love, where they made friends.”