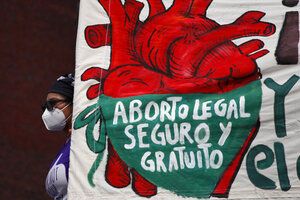 FILE - In this Sept. 28, 2020 file photo, a woman holds a banner reading, in Spanish, "Legal, safe, and free abortion, legalize and decriminalize abortion now, for the independence and autonomy of our bodies," as abortion-rights protesters demonstrate in front of the National Congress on the "Day for Decriminalization of Abortion in Latin America and the Caribbean," in Mexico City. The Supreme Court of Mexico has on Tuesday, September 7, 2021, annulled several statutes on the northern state of Coahuila that criminalized abortion. (AP Photo/Rebecca Blackwell, File)

MEXICO CITY (AP) — Susana Dueñas could hardly believe the news: Mexico’s Supreme Court had decided that abortion could not be considered a crime. The 38-year-old woman from central Mexico had spent six and a half years in prison on just that charge.

The court ruled unanimously Tuesday that parts of a law in the northern border state of Coahuila criminalizing abortion were unconstitutional. The decision immediately compels judges across the nation to consider cases with that ruling in mind. And there are thousands of open cases in Mexico against women accused of illegal abortions.

Dueñas comes from the conservative state of Guanajuato, one of the 28 states that still outlaws abortion with some limited exceptions.

“It was moving to think that there aren’t going to be (more) women like us” — people jailed for abortions — Dueñas said. She was one of nine Guanajuato women released from prison in September 2010, not because the state declared them innocent, but because their sentences were reduced with help from an activist organization.

Dueñas was 19 in 2004, when she said she felt like something had detached inside her, went to the bathroom and then went to the hospital. She said she had miscarried, but hospital workers accused her of trying to terminate her pregnancy and called police.

Two detectives stood at the foot of her bed until she was released into their custody. She was later convicted of homicide by a judge and sentenced to 20 years. Cellmates bullied her in prison because of the charge, she said.

On Wednesday, Mexican bishops said that the Supreme Court’s decision displayed a “dangerous and disproportionate contrast” between the defense of women’s rights and the rights of the unborn. Anti-abortion organizations demonstrated in downtown Mexico City, projecting images of fetuses on the walls of the Supreme Court building and the sound of a heartbeat.

Verónica Cruz, director of “The Free,” a nongovernmental organization that fought to free Dueñas and the other women, estimated that it could take another five years to change criminal codes state by state.

There are currently no women imprisoned in Mexico for abortion, but there are approximately 4,600 open cases across the country, Cruz said.

Supreme Court President Arturo Zaldívar said Wednesday that public attorneys would be made available to defend those women. Cruz said the most useful step would be simply closing the cases.

The journey to this moment began nearly a century ago, in the 1930s, when there were proposals to have the state regulate abortion, wrote anthropologist and feminist Marta Lamas in a 2009 piece in Nueva Sociedad magazine. Another big push to decriminalize abortion in Mexico followed in the 1970s.

But it was not until 2007 that Mexico City became the first jurisdiction in Mexico to make abortion legal. By that time, Dueñas had already been in prison for three years, more than 200 miles from the capital.

Critics of the capital’s move to legalize abortion filed challenges, but the Supreme Court — then more conservative than the current one — ruled that it was constitutional.

Tuesday’s decision resulted from a case filed in 2017 by then federal Attorney General Raúl Cervantes challenging the Coahuila law as unconstitutional.

“How great that now after so many years of fighting, of sharing our experiences, it’s been achieved,” Dueñas said from her home in Santa Teresa, Guanajuato, where for years she was shunned by conservative neighbors. “Women and their rights must be respected.”

The circumstances of Dueñas’ release still bother her, because she was never cleared of the criminal charge. Back then, her priority was winning her release as soon as possible, so her lawyers pursued the sentence reduction rather than appealing the conviction.

Now she wants to have her name cleared. “I would like them to say they made a mistake,” she said.