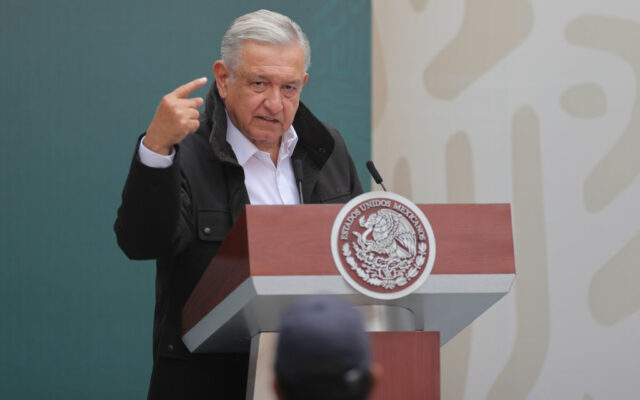 MEXICO CITY, MEXICO - SEPTEMBER 26: President of Mexico Andres Manuel Lopez Obrador speaks during the Ayotzinapa case report at Palacio Nacional on September 26, 2020 in Mexico City, Mexico. On september 26 of 2014, 43 students of Isidro Burgos Rural School of Ayotzinapa disappeared in Iguala city after clashing with police forces. The students were accused of attempting the kidnap of buses to be used for protests. The government of former Mexican president Enrique Peña Nieto led an investigation which revealed that corrupt police officers kidnapped the students and then were handed to members of a drug cartel who killed them after a few hours. Known as the 'Verdad Historica' (Historical Truth) this version has been refuted by the current government to find evidence that proves what actually happened to the students. (Photo by Hector Vivas/Getty Images)

MEXICO CITY (AP) — Mexican President Andrés Manuel López Obrador returned to his daily morning news conferences Monday following a two-week absence after catching coronavirus, but vowed not to wear a mask or require Mexicans to use them.

“There is no authoritarianism in Mexico … everything is voluntary, liberty is the most important thing,” López Obrador said. “It is each person’s own decision.”

López Obrador revealed he received experimental treatments, which he described only as an “antiviral” medication and an anti-inflammatory drug.

The president also revealed that he twice tested negative in late January in rapid tests that are widely used in Mexico, before a more thorough test — apparently PCR — came back positive the same day.

“I came through well, healthy,” López Obrador said, noting he had been doing breathing exercises as well. “We are back on our feet again, in fighting style.”

Many residents of Mexico City have been unable to find beds at Mexico City’s overcrowded hospitals, and have been forced to treat sick relatives at home. López Obrador was treated at the apartment where he lives in the city’s National Palace.

Despite Mexico’s dearth of vaccines — the country hasn’t received new shipments in weeks, and is down to its last 55,000 doses — López Obrador repeated his faith that the country will get enough vaccines from Pfizer, Russia, China and India to vaccinate all Mexicans over 60 by the end of March.

That would imply the daunting task of giving about 15 million people at least one dose in just a month and a half.

López Obrador has held his daily news conferences almost every working day for more than two years, and this was the longest he has been absent from them.

True to style, López Obrador came back swinging, saying his opponents “have not stopped politicizing the issue of COVID,” and claiming that “the plague of corruption” has done much more damage to Mexico than the novel coronavirus.