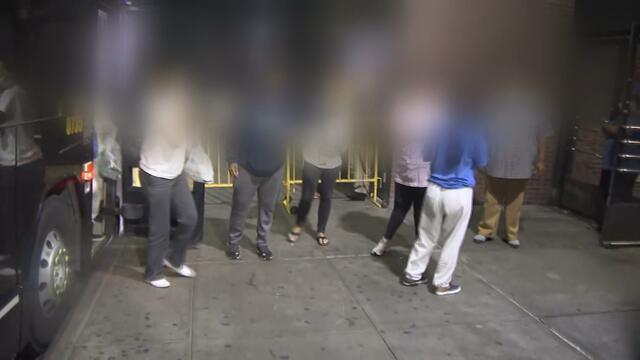 ▶ Watch Video: Lawyer for migrants flown to Martha’s Vineyard calls for federal investigation
A group of Venezuelan migrants on Tuesday filed a lawsuit in federal court against Republican Gov. Ron DeSantis and other Florida officials who took credit for flying them to Martha’s Vineyard, alleging that they were lured onto flights through gifts and false offers of jobs and services.

Three migrants from Venezuela represented by civil rights attorneys in Massachusetts accused DeSantis of violating several federal laws and the U.S. Constitution, asking the federal district court in Boston to prohibit Florida from “inducing immigrants to travel across state lines by fraud and misrepresentation.”

The Venezuelan asylum-seekers also asked the court to award them and the several dozen other migrants flown to Martha’s Vineyard last week monetary compensation for the emotional trauma they say they suffered as a result of their transportation to the Massachusetts island.

The class-action lawsuit, which seeks to cover the roughly 50 migrants taken to Martha’s Vineyard, alleged that an unknown person gained the migrants’ trust in Texas by offering them McDonald’s gift cards, free hotel rooms and assistance getting them to a destination where they would find employment, housing and other services.

The lawsuits accused the person, who the migrants said identified herself as “Perla,” of “trolling” streets outside a migrant shelter in San Antonio to identify and befriend the Venezuelan asylum-seekers, who had been released and allowed to seek asylum by federal officials along the southern border.

After gaining the trust of a few dozen migrants, the lawsuit alleged, “Perla” placed them in hotel rooms for a few days and then facilitated their transportation to an airfield, where they boarded the flights that would ultimately take them to Martha’s Vineyard.

But the lawsuit said the migrants were told they were being taken to Washington, D.C., or Boston. The migrants, the suit said, were also provided folders that included brochures with the services that Massachusetts offers to refugees, even though the migrants had not been resettled through the U.S. refugee program.

It was only after the planes took off that the migrants were told their final destination was Martha’s Vineyard, according to the lawsuit.

Upon landing on the Massachusetts island, the migrants were shocked. Some of them, the lawsuit said, tried to call and message “Perla” but did not receive a response. One migrant, referred to as Jesus Doe, sent “Perla” a voice message, saying “One question, what institution are we supposed to look for? We arrived and no one is saying anything.”

One Venezuelan mother traveling with her husband and their 11-year-old child said she “felt helpless, defrauded, and desperate” after arriving in Martha’s Vineyard. The mother, referred to as Yanet Doe in the suit, said she started crying.

The lawsuit, which was filed by Lawyers for Civil Rights, a Boston-based organization, said the migrants “experienced cruelty akin to what they fled” in Venezuela, which has seen millions of its citizens flee in recent years due its economic collapse and repressive government.

“Defendants manipulated them, stripped them of their dignity, deprived them of their liberty, bodily autonomy, due process, and equal protection under law, and impermissibly interfered with the Federal Government’s exclusive control over immigration in furtherance of an unlawful goal and a personal political agenda,” the lawyers wrote.

The decision to send migrants to Martha’s Vineyard, which sent local and state authorities scrambling to find shelter, food and other accommodations for the unexpected arrivals, elicited withering criticism from advocates for asylum-seekers, the Biden administration and Democratic officials, who denounced it as dehumanizing political spectacle.

On Monday, the sheriff of Texas’ Bexar County said his office had launched an investigation into Florida’s transportation tactic, referring to the affected migrants as victims who had been lured onto the flights. Advocates and some Democrats have asked the Justice Department to conduct a similar probe.

But DeSantis has defended his actions, echoing arguments from other Republican governors who’ve said Democratic-led cities and states should’ve been receiving migrants because their jurisdictions have declared themselves sanctuaries for immigrants living the country without legal status.

Representatives for DeSantis did not immediately respond to a request to comment on the allegations in Tuesday’s lawsuits. For days, they have not answered several questions about the information that was provided to migrants who were transported to Martha’s Vineyard.

Like DeSantis, the Republican governors in Texas and Arizona have also been transporting migrants from the U.S.-Mexico border to Democratic-controlled cities. Since April, Texas has bused more than 11,000 migrants to Washington, D.C.; New York; and Chicago. Arizona, meanwhile, has sent more than 1,800 migrants to D.C.

The 50 Venezuelans migrants flown to Martha’s Vineyard last week were transported to Joint Base Cape Cod, where they have been receiving shelter, legal counsel and other services facilitated by Massachusetts state officials.