Milley stands by communications with China amid new book 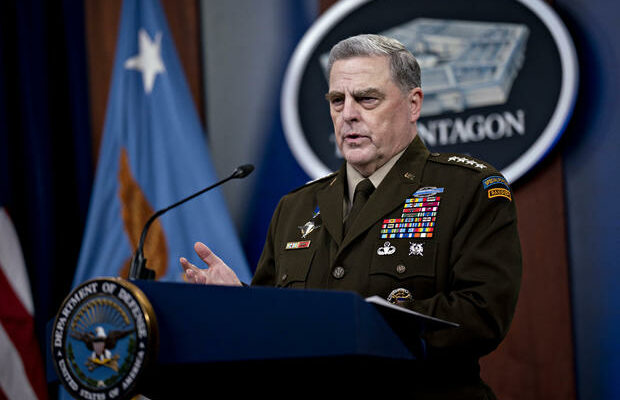 Mark Milley, chairman of the joint chiefs of staff, speaks during a news conference at the Pentagon in Arlington, Virginia, U.S., on Wednesday, Sept. 1, 2021. President Biden yesterday declared an end to two decades of U.S. military operations in Afghanistan, offering an impassioned defense of his withdrawal and rejecting criticism that it was mishandled. Photographer: Andrew Harrer/Bloomberg via Getty Images

Washington — Chairman of the Joint Chiefs of Staff General Mark Milley denied any wrongdoing with calls with his Chinese counterpart held in the closing months of the Trump administration, revelations of which sparked outrage from GOP lawmakers and calls for his termination.

Colonel Dave Butler, a spokesman to Milley, said in a statement to reporters the calls are part of his regular communications with defense chiefs worldwide, including China and Russia, and are crucial to reducing tensions between nations, as well as “avoiding unintended consequences or conflict.”

“His calls with the Chinese and others in October and January were in keeping with these duties and responsibilities conveying reassurance in order to maintain strategic stability,” Butler said in a written statement. “All calls from the chairman to his counterparts, including those reported, are staffed, coordinated and communicated with the Department of Defense and the interagency.”

Milley’s calls with his Chinese counterpart were revealed Tuesday in excerpts of a new book, “Peril,” from reporters Bob Woodward and Robert Costa to be published next week. According to reports, Milley held two phone calls with General Li Zuocheng of the People’s Liberation Army, during which he assured him the U.S. would not launch an attack against China.

One of the calls was held October 30, and the other January 8, two days after a mob of former President Trump’s supporters breached the U.S. Capitol, according to reports about the book.

The authors also claim Milley said he would alert his Li in the event of an attack by the U.S., and, following the January 6 assault on the Capitol, sought to reassure his counterpart the U.S. was stable.

The revelations from the book, published by several news outlets Tuesday, prompted backlash from Republicans who said Milley should either resign or be fired. GOP Senator Marco Rubio of Florida said the reports indicate the chairman of the joint chiefs “worked to actively undermine” the commander-in-chief and “contemplated a treasonous leak of classified information to the Chinese Communist Party in advance of a potential armed conflict” with China.

Mr. Trump lambasted Milley, saying in a statement he should be tried for “treason.” The former president denied he was thinking of attacking China.

In addition to detailing Milley’s conversations with his counterpart in China, the new book also reportedly reveals he gathered senior military officers after the January 6 attack to review procedures for launching nuclear weapons and acknowledged that while the president could order a launch, Milley had to be part of the process.

Butler, Milley’s spokesman, said the general “frequently” holds meetings with uniformed leaders across the military to keep them abreast of “current issues” as part of his responsibilities as senior military adviser to the president and defense secretary.

“The meeting regarding nuclear weapons protocols was to remind uniformed leaders in the Pentagon of the long-established and robust procedures in light of media reporting on the subject,” he said. “General Milley continues to act and advise within his authority in the lawful tradition of civilian control of the military and his oath to the Constitution.”

Despite the calls from Republicans for Milley to be dismissed, the White House on Wednesday continued to stand by him. White House press secretary Jen Psaki told reporters Wednesday the reported calls came during a time when Mr. Trump “fomented unrest” in the nation that led to the January 6 assault.

“The president has complete confidence in his leadership, his patriotism and his fidelity to our Constitution,” she said of Milley.