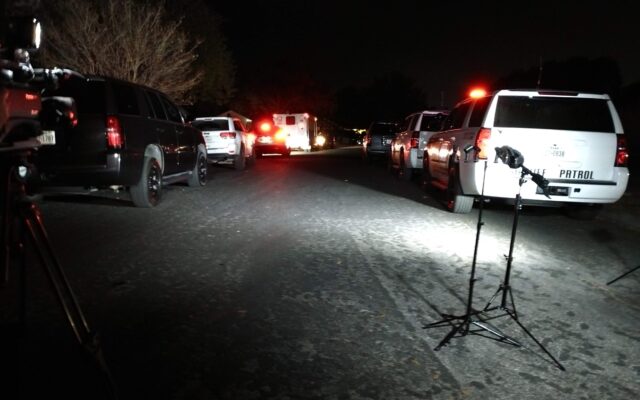 UPDATE: Bexar County Sheriff Javier Salazar says they found $29 million worth of methamphetamine, in addition to $400,000 worth of black tar heroin in a conversion lab in the Northeast Side.

Deputies and Drug Enforcement Administration agents discovered the lab Thursday night after the arrest of 39-year-old Jose Armando Villasana Hernandez during a traffic stop on Highway 281 near Jones Maltsberger Road.  Salazar says he had 10 kilos of meth and two young children in his vehicle.  Investigators believe Hernandez was transporting liquid meth in 5 gallon buckets from Mexico, and it was being converted into crystal meth inside that home on Lake Grove  Drive to be distributed in the United States.

“None of the agents there could recall even seeing a conversion lab since 2015, and certainly not one of this size and scope,” said Salazar.

Based on their findings, the home was being used solely for the purpose of processing methamphetamine.   Salazar says they found an air mattress, but no furniture, no food or fixtures.   They did find four cans of pumpkin spice air freshener, which the suspects may have used to try to cover up the strong odor of acetone.

“The fact that they were even trying to attempt to mask it (chemical odor) with anything is laughable.  This was such a big operation, I don’t see how they would have been able to possibly try to mask it, even with, you know,  the pumpkin spice room spray,” Salazar said.

He says a conversion lab of that  magnitude is dangerous, not only because of the suspects involved, but because of the volatile chemicals that were used.

“Methamphetamine with acetone on industrial-size burners could have led to a horrendous explosion that probably would have leveled this house plus several others around it,” said Salazar.

Bexar County Sheriff Javier Salazar said his deputies and agents with the federal Drug Enforcement Administration had been following a suspect in their drug distribution investigation and stopped him in a traffic stop on U.S. 281 near Jones-Maltsberger Road.

In that stop, agents found 10 kilograms of methamphetamine in the vehicle. Two children were in the car with the suspect at the time of the stop.

With information from the traffic stop and details investigators already had in the case, they went to a house on Lake Grove Drive in a neighborhood just outside of the San Antonio city limits off of FM 78 and Foster Road.

“They found… at least another 20 to 30 kilos of methamphetamine here as well,” Salazar told reporters Thursday night.

Salazar said these people used volatile chemicals to convert it into solid form and then packaged to be sold and distributed elsewhere in the United States.

“The most disturbing part of this find was the fact that we found very large burners, almost like the burners that you would see that people would use to fry turkeys or boil big pots of shrimp — we found probably five of those with big propane tanks and gallons and gallons of acetone,” the sheriff detailed.

Salazar said it is very rare to find an operation like this, especially one in a well-populated neighborhood.

The chemicals had the capability of blowing the roof off the house and severely damaging nearby home had there been an explosion.

Salazar estimated the value of the drugs to be at least $2 million to $3 million.

The house, which sits near the beginning of a dead end street in the Woodlake Park neighborhood, was described by the sheriff as not being a residence at all — it was simply a meth operation.

“There’s very little by way of accommodations for anybody to stay.  Maybe an air mattress is what we saw inside the residence, but it appears all it is is a lab.”

The sheriff expects to hear from neighbors about the oddities they have seen from the house now that it is known there was a meth lab inside that likely smelled strongly of chemicals.

Salazar said the windows had been removed from the house to improve indoor ventilation, making it very likely people in the area would have noticed a strong chemical smell, similar to one people may notice inside a nail salon.

Investigators are looking into whether the meth lab technicians owned the property or were renters.

“Typically, with operations like this, they rent under a fictitious name and it’s usually a cash transaction, so we’ll finding out if the landlord knew about it or to what extent,” Salazar said.

The sheriff said he has never seen a lab like this throughout his law enforcement career.  He said DEA agents at the scene said they had not seen a scene like this in about five years.

One person has been arrested.  The suspect’s identity has not yet been publicly released.