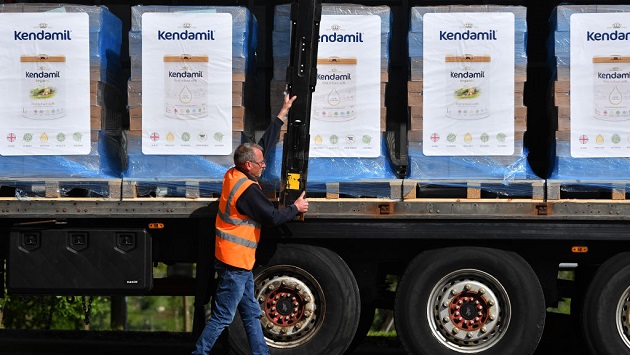 KENDAL, ENGLAND - JUNE 07: Pallets of Kendamil Classic First baby formula are loaded onto a lorry at Kendal Nutricare, the baby-formula producer on June 07, 2022 in Kendal, England. The Cumbria-based company, which is the UK's only baby-formula producer, received fast-track approval from the US Food and Drug Administration to export to the US as the country experiences a nationwide formula shortage. Kendal Nutricare has committed to sending at least 2 million cans of its Kendamil baby milk as part of Operation Fly Formula, which will see United Airlines transport Kendamil to the US pro-bono over the next three weeks. (Photo by Anthony Devlin/Getty Images)

(WASHINGTON) — Millions more bottles’ worth of critically needed infant formula are set to touch down on U.S. shores later this month, as the Biden administration continues its push to replenish the supply on the nation’s empty shelves.

More than 3.2 million bottles’ worth of formula will be airlifted in on planes donated by Delta Airlines in the coming weeks, ABC News is first to report.

Those some-212,000 pounds of Kendamil infant formula, from U.K. manufacturer Kendal Nutricare, will begin shipping into the country beginning on June 20.

Upon distribution, it will be available for families’ purchase at select U.S. retailers nationwide, as well as online, the administration says.

The newly announced flights are the latest in a lengthening list of formula shipments coming in through FDA’s exercised import discretion; in total, Kendal Nutricare has committed to export at least 54 million 8-ounce bottles’ worth to the U.S.

Friday’s announcement also comes on the heels of two other large shipments putting wheels down in the U.S. just a day before.

It couldn’t come soon enough for so many American families still scrambling to feed their children amid the urgent supply crisis.

So far, cumulatively, the White House says it has secured commitments to import upwards of 127.5 million bottles’ worth. President Joe Biden, acknowledging the strain so many parents have been feeling, as well as political criticism from both Democrats and Republicans.

“There’s nothing more stressful than the feeling you can’t get what your child needs,” he said meeting virtually with formula manufacturers and members of his administration, saying his team will use “every tool available” to get more formula on shelves “as quickly as possible.”

“Still we have work to do,” Biden said. “But we’re making critical progress.”