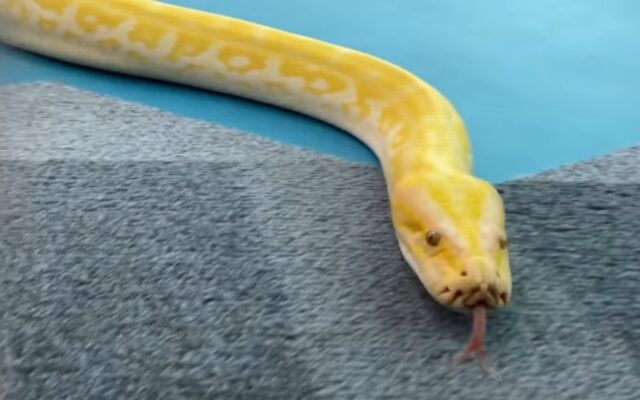 The snake was recaptured in a ceiling crawl space early Thursday morning after two days of searching, WBRZ-TV reported.

Video posted by the station shows workers using a ladder as Cara — wrapped around the shoulder and back of one of them — is carried down. The yellow and white Burmese python was taken to the Louisiana School of Veterinary Medicine for a health check.

Cara slithered out of her enclosure at the Blue Zoo in the Mall of Louisiana in Baton Rouge on Tuesday.

“While we’ve created a very secure home for Cara, our Burmese Python, she has slithered out of her exhibit,” the Blue Zoo said in a statement after it escaped. “Cara is a non-poisonous, friendly snake that enjoys her time interacting with guests during our Snake Education Shows.”

Pythons slowly squeeze their prey to death before swallowing them. Cara was described as “very sweet” by her handlers.