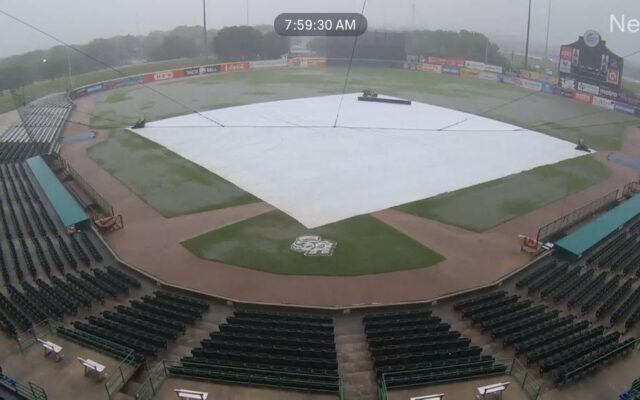 The Missions were scheduled to take on the Amarillo Sod Poodles in the first match-up of a six-game series, but preparations for the first-ever game between the two teams were put into overdrive as heavy rains left five inches of standing water on the field at Wolff Stadium.

Nearly 10 inches of rain fell in parts of the county and Leon Creek, which neighbors the stadium and normally sits at around one foot deep, reached nearly 26 ft. and flooded nearby roadways.

The entire front office staff at the stadium worked together to squeegee, funnel, pump, rake and throw whatever they could on the field to get it dry, Gasaway said.

“Fortunately, we were able to get the game in,” Gasaway said. “The sun came out around 4 o’clock and that helped us dry a little bit and by 7 o’clock we could start.”

The Missions sent the Sod Poodles packing in game one after 10-innings with a final score of 5-4. First pitch in the second game of the series is tonight at 7:05 p.m.

The matchup between the two teams is the first after the San Antonio Missions AA team moved to Amarillo in 2019 when a AAA franchise moved to San Antonio. The AAA team in San Antonio continued using the Missions as a team name and the Amarillo team renamed themselves to the Sod Poodles, paying homage to the prairie dogs that live in West Texas. A reorganization of the minor leagues by Major League Baseball following the 2020 season put the Missions back to the AA level while the Sod Poodles remained in Amarillo. Both teams are owned by Elmore Sports Group.