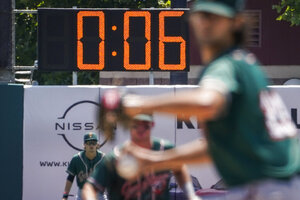 FILE - A pitch clock is deployed to restrict pitcher preparation times during a minor league baseball game between the Brooklyn Cyclones and Greensboro Grasshoppers, July 13, 2022, in the Coney Island neighborhood of the Brooklyn borough of New York. Major League Baseball is set to announce a pitch clock and limits on defensive shifts next season in an effort to shorten games and increase offense. The sport’s 11-man competition committee is set to adopt the rules changes Friday, Sept. 9. (AP Photo/John Minchillo, File)

NEW YORK (AP) — Major League Baseball adopted its first pitch clock, limits on defensive shifts and larger bases for next season in an effort to shorten games and increase offense in a tradition-bound sport.

The decision on the clock and shift limits by the sport’s 11-man competition committee was made Friday over the unanimous opposition of players on the panel. The changes had long been pushed by baseball Commissioner Rob Manfred in an effort to combat the increase in dead time over four decades and suffocation of offense in the age of analytics.

“Throughout the extensive testing of recent years, minor league personnel and a wide range of fans — from the most loyal to casual observers — have recognized the collective impact of these changes in making the game even better and more enjoyable,” Manfred said in a statement.

Until last winter, MLB needed one year advance notice to make changes to on-field rules without the approval of the players’ association. The union agreed in the March lockout settlement to establish the committee, which includes six management representatives, four players and one umpire.

“Players live the game — day in and day out. On-field rules and regulations impact their preparation, performance, and ultimately, the integrity of the game itself,” the union said in a statement. “Major League Baseball was unwilling to meaningfully address the areas of concern that players raised.”