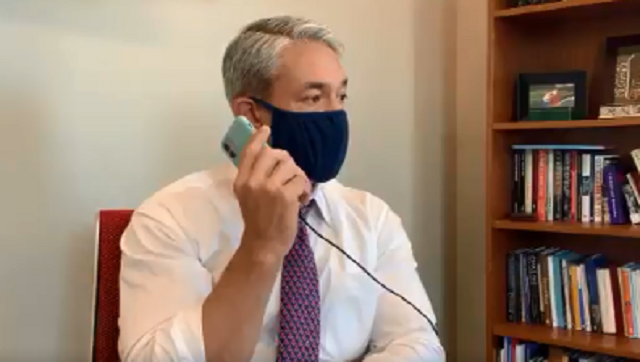 SAN ANTONIO (KTSA News) – Now that the state has declared all adults eligible for the COVID-19 vaccine, Mayor Ron Nirenberg has scheduled his appointment.

He called the city’s 3-1-1 number to register and videotaped the phone call.  In the call, which Nirenberg posted on twitter, you can hear a man’s voice giving him instructions for his vaccination appointment at the Alamodome.

“Just take your face mask, your photo ID.  No need to step out of the vehicle.  It’s going to be drive up and then they’ll give you your second appointment date and time there as well, sir,” said the man.

Apparently, Nirenberg didn’t identify himself as the mayor because as the conversation was ending, the man asked,”Aren’t you the mayor, Ron Nirenberg?”

The mayor chuckled and said “yes,” to which the man replied,”Cool. It’s been a pleasure talking to you.”  The mayor thanked him again, and the unidentified man ended the conversation saying,”It was a pleasure signing you up, man.”

Nirenberg says University Health, the City of San Antonio and WellMed are getting an additional 23,000 vaccines next week.

“One question… are you the *mayor* Ron Nirenberg?”

Heard that there were still some vaccine appts available through 311, so I decided to book my first Pfizer shot.

You can always call 311, option 8 to check for appts. pic.twitter.com/g4HaRQEHv5