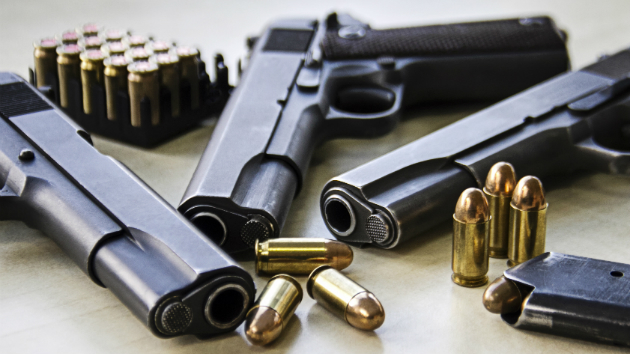 Getty Images
▶ Watch Video: Gun violence erupts across U.S. over July 4th weekend
Fourth of July weekend saw a rise gun violence – with more than 180 people killed and 516 injured in shootings across the U.S., according to data from Gun Violence Archive.

In the first five days of July, there were a whopping 20 mass shootings, bringing 2021’s total to 336. May saw 72 mass shootings and June saw 76, according to the archive.

“The 14 mass shootings over this past holiday weekend (Friday to Sunday) are the most of any weekend in 2021,” the organization said in a tweet.

Weekly Mass Shooting Update: There have been 13 American mass shootings in the 4 days of July, bringing 2021's total to 329.

In Chicago, where police said gun violence is increasing this year, at least 82 people were shot – 14 fatally – over the holiday weekend, CBS Chicago reports. The number of shootings on Fourth of July weekend is up from 2019, when 68 people were shot, and 2020, when nearly 80 people were shot.

A 40-year-old man was killed on Friday night after a neighbor complained about his music. After an argument, an unidentified person shot the victim several times in the torso, CBS Chicago reports.

On Saturday night, woman was killed and two men were injured in a shooting in an alley. A 33-year-old man started shooting around 10:46 p.m. and a witness with a concealed carry license saw the incident and then shot the suspect. The suspect is in serious condition and was taken into custody, according to the station.

In New York City, police reported 26 victims in 21 shootings over the holiday weekend. On Long Island, one man was killed and two people were hospitalized after gunfire erupted at a Fourth of July block party. Police are looking for a suspect, CBS New York reports.

In Cincinnati, two men are believed to have shot and killed each other, injuring three others, at the city’s Smale Riverfront Park on Sunday night, according to CBS affiliate WKRC.

And in Dallas, five people were shot – three killed and one in critical condition –  during a confrontation at a neighborhood block party on the Fourth of July, according to CBS Dallas.

According to Gun Violence Archive, there have been 22,662 gun violence deaths in 2021. This includes all causes, such as murder, unintentional killings and suicide. There have been 336 mass shootings and 16 mass murders.

To catalog these events, the archive uses up to 7,500 active sources, including law enforcement, government and media.

Last year, homicide rates surged nearly 30% across 34 U.S. cities from the previous year. This historic year-to-year increase, was caused by a “perfect storm” of possible contributing factors, according to a new study conducted for the Council on Criminal Justice.

Societal inequities exacerbated by the coronavirus pandemic, strains on gun violence intervention programs and a fraught relationship between police and communities, may have contributed to the uptick researchers say.

Authorities had hoped that the spike in homicides last year would subside, but they remain higher than they were in pre-pandemic times. Although official data has yet to be released by the federal government, a survey of law enforcement agencies in dozens of U.S. cities conducted by the Major Cities Chiefs Association found a higher rate of homicides and aggravated assaults in January through March of 2021 compared with the same time period in 2020.

Erin Donaghue contributed to this report.