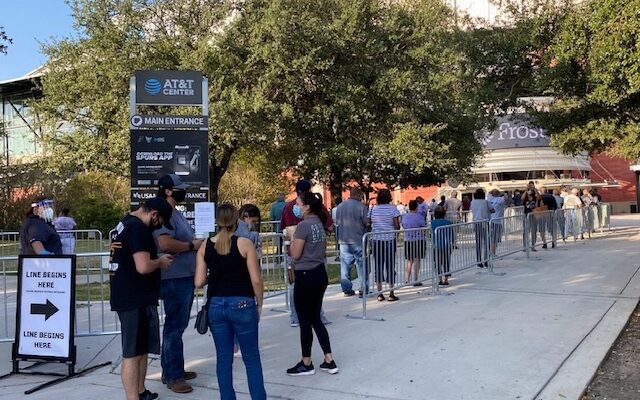 SAN ANTONIO (KTSA News) – Long lines are reported at the polls across the city and Bexar County  on the first day of early voting in the November 3 election.

Thirty-nine-year-old Giavanno Flagg was the second person to cast a ballot Tuesday morning at the AT&T Center mega voting site.  He showed up at 6:45 a.m., even though the polls didn’t open until 8 o’clock, or in this case, a little after 8.  Flagg told KTSA News he got a little nervous when he was told there was  a glitch and the voting wouldn’t start on time.  It took a few minutes to get started, but things were running smoothly after the slight delay.

“I just wanted to get here as soon as early voting started and do my part and make sure my vote counts,” said Flagg. “This year is so important with so much going on, so I did this for my three daughters and their future.”

Rosie and David Welker came prepared. They brought  chairs and made sure their cell phones were charged up.

“I didn’t expect the lines to be this long, but my husband did and he made sure we charged up our cell phones,” said Rosie Welker.

Raul Rodriguez and his wife, Jessica were among the first to cast their ballots at the AT&T Center.  He wore a stars-and- stripes t-shirt to the voting poll because he said there’s a lot riding in this Presidential election.

“I am p****d off,” Rodriguez said, getting emotional as he spoke about voting for the future of his grandkids. “This is for my grandkids and my kids.  We’ve got to change.  We’ve got to wake up.”

His wife, Jessica Rodriguez, said there should be more focus on helping the middle class.

“I’ve been checking the news every day.  I’ve been counting the minutes until I could come here and vote,” said Thompson.

Odilia Barton said she wanted to make sure she got to cast her ballot and she didn’t want to take any chances.

“We wanted to make a statement that we were serious.  People are ticked off.  I’m ticked off,” she said.