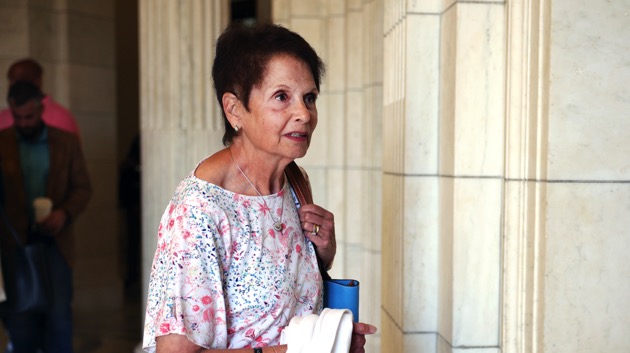 WASHINGTON, DC - MAY 27: Gladys Sicknick, the mother of late Capitol Police Officer Brian Sicknick, leaves a meeting with Sen. Mitt Romney (R-UT) as she meets with senators to urge for a January 6 commission on May 27, 2021 in Washington, DC. Officer Sicknick suffered two strokes and died a day after fighting a pro-Trump mob during the January 6 insurrection at the Capitol. (Photo by Kevin Dietsch/Getty Images)

(WASHINGTON) — The mother of fallen Capitol Police Officer Brian Sicknick returned to the site of the Jan. 6 attack on Thursday to lobby Senate Republicans to vote to establish a bipartisan, independent commission to investigate the assault she argues caused her son’s death.

“This is why I’m here today, and I’m usually I’m staying in background, and I just couldn’t — couldn’t stay quiet,” she told reporters as the Senate was poised to vote on starting debate on the commission proposal — a move Republicans have threatened to filibuster.

Sicknick’s mother made clear she came with the goal to persuade lawmakers on the fence to vote for the commission. She was scheduled to also sit down with Sen. Susan Collins of Alaska — who supports a commission with an amendment — as well as Sens. Ron Johnson of Wisconsin, Bill Cassidy of Louisiana and Lindsey Graham of South Carolina, who are poised to vote no.

But leaving Johnson’s office, Comstock, speaking for the group, said the senator “made clear that he does disagree with the commission.”

In a written statement released after the meeting, Johnson said he “respectfully disagreed on the added value of the proposed commission” and remains opposed, adding “I did commit to doing everything I could to ensure all their questions will be answered.”

Garza said earlier outside Romney’s office that members who are considering voting against the legislation should “look at the footage of what happened.”

“It’s very obvious it wasn’t a peaceful day,” she said, an apparent jab at Republican Rep. Andrew Clyde of Georgia who said earlier this month, “If you didn’t know the TV footage was a video from January the 6th, you would actually think it was a normal tourist visit.”

“It’s very disturbing that anyone would not want to support this,” she said. “Why would they not want to get to the bottom of such horrific violence? They are here today, and with their families and comfortable because of the actions of law enforcement that day so I don’t understand why they would resist getting to the bottom of what happened that day — fully understanding how to prevent it. It just boggles my mind.”

Fanone, joining the group, has been vocal about the “combat” he was forced to engage in on Jan. 6. He was beaten with a flag pole, concussed and suffered a heart attack defending lawmakers during the riot.

According to accounts from Rep. Eric Swalwell, D-Calif., Fanone called House Minority Leader McCarthy to discuss what happened to him on Jan. 6 and McCarthy refused to speak with Fanone. Fanone says he has called multiple times and at one point was hung up on.

Dunn told ABC News in an exclusive interview in February he was “called a [N-word] a couple dozen times today protecting this building” and recalled telling his colleague. “Is this America? They beat police officers with Blue Lives Matter flags. They fought us, they had Confederate flags in the U.S. Capitol.”

McCarthy and Senate Minority Leader Mitch McConnell announced their opposition to the commission last week — ahead of the House vote approving the measure with 35 Republicans joining Democrats. McConnell’s high-profile opposition has provided political cover for most Republicans in both chambers to reject the legislation.