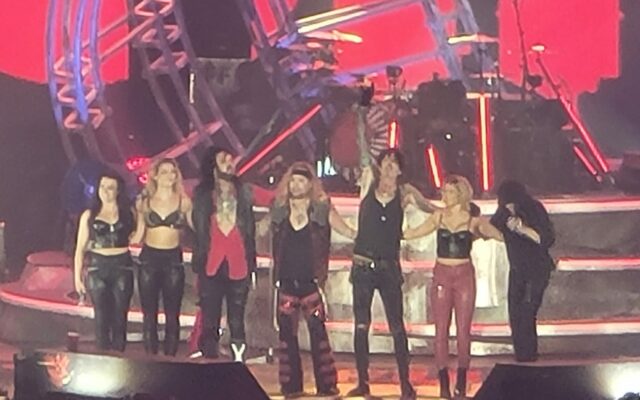 SAN ANTONIO (KTSA News) — He used to be known for his drumming skills, then it was his high profile marriages to Heather Locklear and Pamela Anderson.

But for the past few weeks, Motley Crue drummer Tommy Lee has been getting a lot of attention for a picture he posted on social media.

The 59 year old rock star set the internet ablaze earlier this month with a “full monty” photo posted online. It was later taken down and replaced with an edited version, the word “Oops” added on.

At first Lee said the nude photo was a mistake.

Apparently, that was not true.

Lee and his bandmates rolled into San Antonio over the weekend for a show at the Alamodome.

Motley Crue was last on the bill that featured Joan Jett, Poison and Def Leppard. Before taking his seat behind a piano to play the band’s hit “Home Sweet Home”, Lee took the microphone and addressed the elephant in the room by explaining how the picture of his junk ended up online.

He told the raucous crowd that the band was on a two week break from the tour and he went on a bender.

“I got f—ing sideways and f— and got naked and posted pictures of my d—.”

His story got a….huge response from the crowd and instead of moving on after his admission, Lee decided he wanted Crue fans to share in the experience. He said he preferred female anatomy but….

He spotted one man in a pink shirt near the front of the stage and invited him to show his stuff. The fan seemed willing to take Lee up on his offer…then pointed at a woman sitting next to him and said “no”.

Lee then suggested the man divorce the nay-sayer before getting back to the music.

We have received no word of any indecent exposure arrests after Lee’s invitation to let it all hang out.