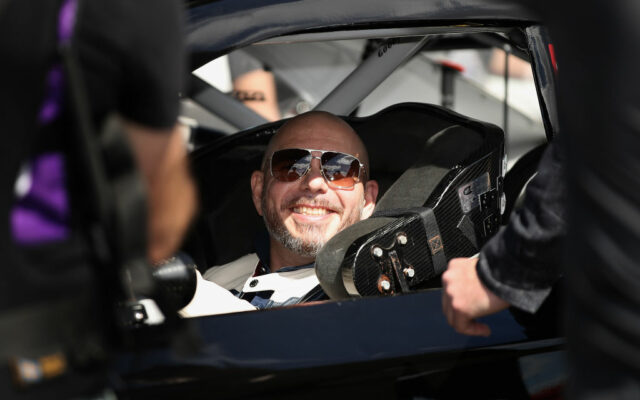 AVONDALE, ARIZONA - MARCH 08: Rapper Pitbull sits in a car while filming a commercial spot during the NASCAR Cup Series FanShield 500 at Phoenix Raceway on March 08, 2020 in Avondale, Arizona. (Photo by Christian Petersen/Getty Images)

CHARLOTTE, N.C. (AP) — New NASCAR team Trackhouse Racing has brought entertainer Pitbull on as an ownership partner for an organization making its debut next month at the Daytona 500.

Trackhouse made the Friday announcement with a video on Twitter in which the Grammy winner is featured dancing to an “I believe we will win” chant. He also holds signs that say: “Knuckle Up, Fight Hard. Buckle Up. Fight hard.”

“I’ve been a fan of the NASCAR story since the movie ‘Days of Thunder,’” Pitbull said in a statement. “We are going to show the world NASCAR is not only a sport but a culture.”

Pitbull noted the announcement coincided with his 40th birthday on Friday: “So get ready! Dale!” he ended with his signature tagline that translates to “Let’s go!”

Trackhouse was launched late last year by former driver Justin Marks, who struggled to find a charter that guarantees entry into every Cup Series race on the schedule. He ultimately leased one from Spire Motorsports to get his organization on the grid.

The team has hired Daniel Suarez to drive the No. 99 Chevrolet but it will not be NASCAR’s first pairing of a Latino driver and team owner. Juan Pablo Montoya, a Colombian, drove for Chip Ganassi Racing when it was part owned by Felix Sabates, a Cuban. Suarez is Mexican.