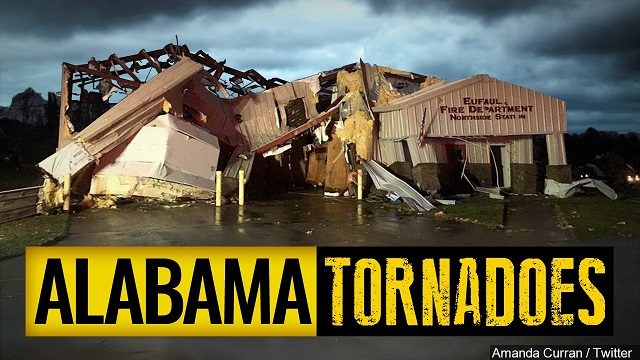 BEAUREGARD, Ala. (AP) — Picking through the twisted debris that had been her Alabama mobile home, Carol Dean found her wedding dress and a Father’s Day note to her husband reading, “Daddy, I love you to pieces.” But the storm took the 53-year-old husband and father.

Dean was on the clock Sunday afternoon at Walmart while her husband was home in Beauregard. As forecasters warned stormy weather was heading toward the Alabama-Georgia line, she said, David Wayne Dean sent a text message cautioning a friend to keep up with the weather on the news.

Then the storm hit and David Dean didn’t make it out. His body was found on the other side of an embankment in the neighbor’s yard.

“Our son found him,” Dean said between sobs Monday. “He was done and gone before we got to him. My life is gone. He was the reason I lived, the reason that I got up.”

The tornado that struck the area where the Deans lived packed winds estimated at 170 mph (274 kph) and chewed a path of destruction nearly a mile (1.6 kilometer) wide. Mobile homes tucked among tall pine trees were swept from their bases and smashed into unrecognizable piles of rubble. Toys, clothes, insulation, water heaters and pieces of metal were scattered across the hillsides where once towering pines were snapped in half.

On Monday, the storm’s toll stood at 23 people dead in this rural community in Lee County. According to the sheriff, dozens remained missing after the deadliest U.S. tornado in nearly six years. Rescue crews using dogs and drones searched for victims amid splintered lumber and twisted metal.

“I’m not going to be surprised if we don’t come up with some more deceased. Hopefully we won’t,” Lee County Coroner Bill Harris told a news conference. He said the dead included almost entire families and at least three children, ages 6, 9 and 10. A post on the Lee-Scott Academy’s Facebook page identified fourth-grader Taylor Thornton as being among those killed.

An unincorporated community of roughly 10,000 people near the Georgia state line, Beauregard is in the same county as Auburn University. The community has a few small stores, two schools and a volunteer fire department dotting the main highway.

On the day after the disaster, volunteers used chain saws to clear paths for emergency workers. Neighbors and friends helped one another sift among the ruins.

Julie Morrison and her daughter-in-law picked through the remnants of Morrison’s home, looking for keys and a wallet. They managed to salvage the couple’s safe, her husband’s motorcycle boots and her embossed Bible.

Morrison said she and her husband took shelter in the bathtub — her husband jumping in at the last minute — as the twister lifted their house off its foundation and swept it into the woods.

“We knew we were flying because it picked the house up,” Morrison said, figuring that the shower’s fiberglass enclosure helped them survive.

The National Weather Service said one and possibly two tornadoes struck the area. A powerful EF-4 twister was blamed for most of the destruction on a path about 24 miles (39 kilometers) long, meteorologist Chris Darden said. Darden said the “monster tornado” was the deadliest twister to hit the U.S. since May 2013, when an EF-5 killed 24 people in Moore, Oklahoma.

“It looks like someone almost just took a giant knife and scraped the ground,” Sheriff Jay Jones said. Most of the fatalities occurred with a square-mile (2.6 square kilometer) area, he said.

County Emergency Management Director Kathy Carson said she was “pretty sure” tornado sirens in Beauregard sounded warnings. But authorities were busy with the search-and-rescue and had not yet looked into the question.

The twister was part of a powerful storm system that slashed its way across the Deep South, spawning numerous tornado warnings in Georgia, South Carolina and Florida.

An early March tornado outbreak in the Alabama-Mississippi area is not unusual, tornado experts said.

The weather service’s Storm Prediction Center posted forecasts for higher tornado activity in the region Thursday, three days before the disaster. University of Georgia meteorology professor Marshall Shepherd said government forecasters “were all over it.”

An EF-5 tornado that struck Joplin, Missouri, in May 2011 killed 158 people. And an outbreak of tornadoes in the Southeast a month before that left an estimated 316 people dead, including at least 250 in Alabama.

For Beauregard, days of mourning lies ahead. The coroner said Monday that he would soon begin releasing bodies to funeral homes.

After the storm, Dean rushed home from work in time to say goodbye to the husband others called Roaddog, for his love of Harley-Davidson motorcycles. She pushed past sheriff’s deputies who tried to keep people from the area and went to where her husband’s body lay.

“They took me down to him,” Dean said, “and I got to spend a little time with him before they took him away.”