Mysterious radio waves coming from the heart of the Milky Way 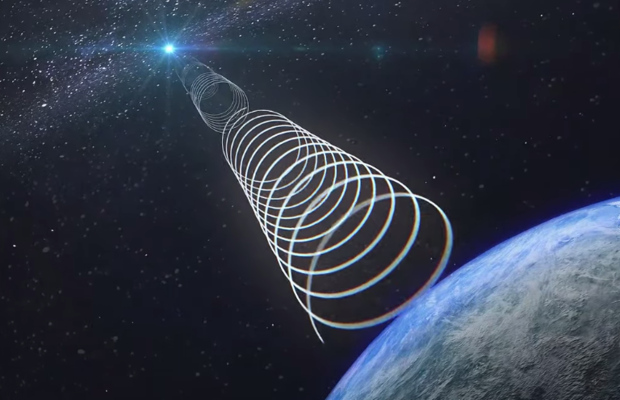 The University of Sydney / Scientists have found radio signals coming from the Milky Way, but still don't know what it is.

Astronomers have detected mysterious radio waves coming from the center of the Milky Way, but so far they have no idea what’s causing it, according to a new study published Tuesday in the Astrophysical Journal.

A team of scientists from across the world discovered the object using the CSIRO radio telescope in Western Australia. Ziteng Wang, the lead author of the study and a PhD student at the University of Sydney, said in a press release that they initially believed it could be a spinning dead star called a pulsar, but its signal didn’t match what they expected from those types of celestial objects.

“The strangest property of this new signal is that it is has a very high polarisation,” Wang said. “This means its light oscillates in only one direction, but that direction rotates with time.”

“The brightness of the object also varies dramatically, by a factor of 100, and the signal switches on and off apparently at random,” Wang added. “We’ve never seen anything like it.”

The radio signal — named ASKAP J173608.2-321635 after its coordinates — was “unique” because it started out invisible, then it turned bright and faded away before reappearing again, said Tara Murphy, who is Wang’s PhD supervisor and professor at the Sydney Institute for Astronomy and the School of Physics.

“This behaviour was extraordinary,” she said.

The scientists detected six radio signals from the source over nine months in 2020 and tried to find the object in visual light, but found nothing. They opted to use the CSIRO radio telescope and failed to recognize the source.

According to the press release, the signals don’t fit any currently understood pattern of variable radio source, and it could suggest a new class of stellar object.

“The information we do have has some parallels with another emerging class of mysterious objects known as Galactic Centre Radio Transients, including one dubbed the ‘cosmic burper,'” said Wang’s co-supervisor, David Kaplan, a professor from the University of Wisconsin-Milwaukee.

“While our new object, ASKAP J173608.2-321635, does share some properties with GCRTs there are also differences. And we don’t really understand those sources, anyway, so this adds to the mystery,” he said.

As scientists continue to keep an eye out for more clues, sources from other radio signals have been detected in recent months. In May, NASA traced the source of mysterious fast radio bursts sending signals to Earth.