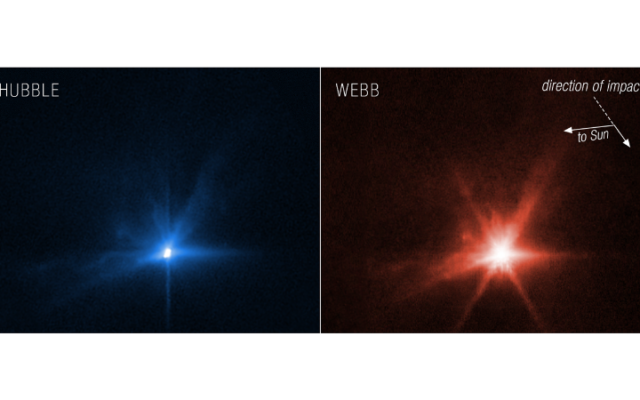 SAN ANTONIO (KTSA News) — Images of planet Earth’s first step in defending itself from an asteroid strike are now released by NASA.

The photos were taken Monday by the Hubble and Webb space telescopes when NASA’s DART spacecraft crashed into a small, harmless asteroid called Dimorphos.

“Webb and Hubble show what we’ve always known to be true at NASA: We learn more when we work together,” said NASA Administrator Bill Nelson. “For the first time, Webb and Hubble have simultaneously captured imagery from the same target in the cosmos: an asteroid that was impacted by a spacecraft after a seven-million-mile journey. All of humanity eagerly awaits the discoveries to come from Webb, Hubble, and our ground-based telescopes – about the DART mission and beyond.”

The collision took place around 7 million miles from Earth with the idea of figuring out if the asteroid’s orbit would change after impact.

NASA says Dimorphos now has a crater, but it will not be known if the asteroid’s trajectory has changed until November.

The DART spacecraft was launched in 2021 and came with a price tag of $325 million.