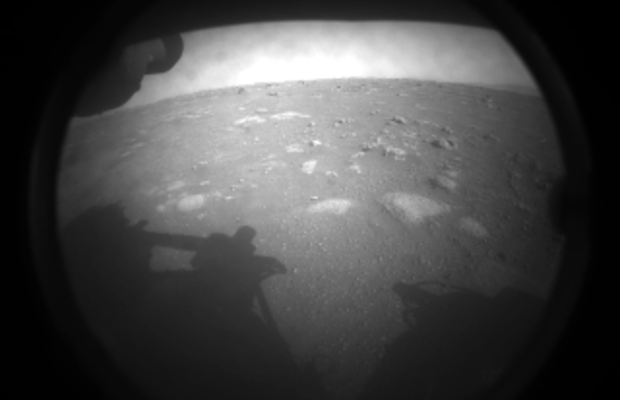 Percy, as the rover is nicknamed, got through the “seven minutes of terror” on Thursday — a series of make-or-break events to land. A successful landing was announced just before 4 p.m. ET from NASA’s Jet Propulsion Laboratory (JPL) in California.

“Touchdown confirmed! Perseverance is safely on the surface of Mars, ready to begin seeking the signs of past life!” Swati Mohan, a guidance, navigation and control officer monitoring telemetry at JPL, called out as the rover landed. Socially-distanced flight engineers burst into cheers and applause as they breathed a collective sigh of relief.

One of the rover’s Hazard Avoidance Cameras, which primarily help with driving, snapped the black-and-white shots. The camera is partially obscured by a clear protective cover. Later images from the rover will be higher-resolution.

Percy itself can also be seen in the first image — its large shadow announcing its arrival.

The photos mark one of the rover’s first successes, and show the team on Earth that it made it to Mars safely.

“Hello, world. My first look at my forever home,” the rover tweeted upon arrival.

“Congratulations to NASA and everyone whose hard work made Perseverance’s historic landing possible,” he tweeted. “Today proved once again that with the power of science and American ingenuity, nothing is beyond the realm of possibility.”

Scientists said they hope to view “pretty spectacular” video and audio footage, as well as additional photos, within the next few days.

The rover, NASA’s most sophisticated to date, will soon begin its hunt for signs of ancient life. Billions of years ago, the Jezero Crater was home to a large lake, and Percy will collect samples that will be the first to make the trek back to Earth for scientists to examine.

During the first month, they also plan to test a small 4.5-pound, $80 million helicopter named Ingenuity. It will attempt the first powered flight in the thin Martian air, a “Wright brothers’ moment” on another world.