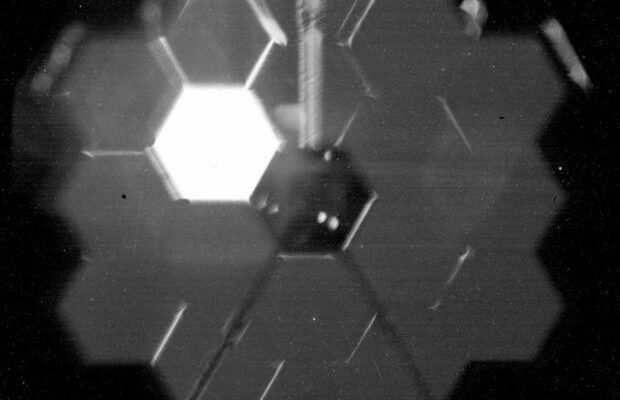 A special lens captured a selfie of sorts, an image of Webb's primary mirror segments in their coarse post-launch alignment. NASA

The first images captured by the James Webb Space Telescope were unveiled Friday: a “selfie” showing the observatory’s 21.3-foot-wide primary mirror and a mosaic showing multiple images of a nondescript star being used to align the 18 segments making up the telescope’s main mirror.

While the blurry, misaligned pictures might disappoint the uninitiated, they are almost exactly what engineers were expecting at this point in the observatory’s complex commissioning, 48 days after its Christmas Day launch

What you are seeing is the actual primary mirror of Webb as it observes its engineering target, a bright star. All the mirror segments are seeing starlight, but the bright segment is bright because, from NIRCam’s view, the segment is directly aligned with the star.

“This amazing telescope has not only spread its wings, but it has now opened its eyes,” said Lee Feinberg, Webb optical elements manager.

NASA is now in the process of aligning the 18 hexagonal segments that make up Webb’s huge main mirror, carefully adjusting the tilt of each one in tiny increments to align the multiple reflections of target stars into a single beam like the one produced by a one-piece mirror.

So far, Feinberg said, the tedious work has gone remarkably smoothly, with no major problems or setbacks.

The first three weeks of Webb’s life in space were devoted to deploying its solar array and high-speed antenna, its secondary mirror, six of the primary mirror’s 18 segments that were folded away for launch and extending a tennis court-size sunshade needed to block out the light and heat of the sun, Earth and moon.

Then on January 25, one month after launch, Webb reached its operational destination, slipping into orbit around Lagrange Point 2 a million miles away in deep space where it will circle the sun in gravitational lockstep with Earth, minimizing the amount of fuel needed to stay on station.

All of that went off without a hitch and since then engineers have been monitoring the telescope’s optics and instruments as they cool down to the ultra-low, near-absolute-zero temperatures required to register faint light from the first stars and galaxies to form in the wake of the Big Bang.

The low temperatures are required because space itself has expanded in the 13.8 billion years since the birth of the cosmos, stretching out that initial light into the infrared region of the spectrum. To “see” those objects, so far removed in space and time, Webb must be colder than the surrounding environment.

The mirror segments are not yet at a uniform temperature. As of this week, the segment temperatures ranged from a “high” of minus 349 Fahrenheit closest to the sunshade to a low of minus 379 degrees farther away. When fully cooled, engineers expect a maximum temperature spread of less than 10 degrees Fahrenheit.

To align the mirror segments, ground controllers have aimed the telescope at a star 242 light years away near the bowl of the Big Dipper known as HD 84406. Using one of Webb’s four instruments, the Near Infrared Camera, or NIRCam, the team began mapping out the reflections from each of the 18 primary mirror segments.

“As planned, we pointed the telescope at a bright, isolated star, and we found and identified 18 spots for the 18 primary mirror segments,” Feinberg said. “At this point, we’ve been able to analyze multiple engineering images that help us understand the alignments and the mirrors themselves.

“And we don’t see anything of concern. This is the first time we’re getting data on mirrors that are actually at zero gravity and using starlight to illuminate the primary mirror. And again, so far the data is matching our models and expectations.”

Marshall Perrin, Webb deputy telescope scientist, said engineers expected the mirror segments to be misaligned by up to a millimeter at the start of the alignment process. To make sure they found the target star in each segment, more than 1,500 images were taken over a region of the sky the size of a full moon.

As it turned out, all 18 images were clustered within the first 10% of the search area, indicating the telescope came through launch with a good coarse alignment.

“That was just a real wow moment, just lots of tears and excitement from everybody there in the room,” said Perrin. “The fact that we found all 18 so close together, and so close to the center of the search region, means the mirrors are already pretty well aligned.”

As for NIRCam, Marcia Rieke, principal investigator at the University of Arizona in Tucson, said her team was thrilled.

“My team and I have worked on NIRCam for over 20 years,” she said. “And the excitement of finally getting some lights through the telescope onto NIRCam’s detectors was really hard to express.

“This place was a giant celebration because the light had made it and we were super-duper happy. … We got beautiful, at least beautiful to a person who’s worked on NIRCam for a long time, images.”

Over the next several weeks, the segments will be aimed, checked and re-aimed in an iterative process designed to move the reflected beams to the center of Webb’s optical axis, where they will be stacked up, or merged, into a single beam. That will provide precisely focused light to Webb’s science instruments.

The first science images are still expected in the June timeframe.

In the meantime, the mirror segments, instruments and detectors will continue to cool down. The average temperature across the mirror is expected to be around minus 370 degrees. Webb’s three near-infrared instruments, mounted in a housing behind the primary mirror, will reach about 388 degrees below zero Fahrenheit.

The fourth instrument, the Mid-Infrared Instrument, or MIRI, must be even colder for its detectors to work as planned. It’s equipped with a high-tech gaseous helium refrigerator that will take its temperature down to an ultra-cold minus 447 degrees. That’s just 7 degrees above absolute zero.