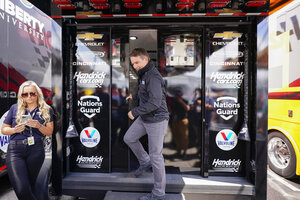 LONG POND, Pa. (AP) — Jeff Gordon retired in 2015 and had the conversation with Rick Hendrick that the Hall of Fame driver could pursue other ventures — broadcasting, business, travel — but one day would get the call to come home.

Years later, Gordon is set to head from the broadcast booth back to the boardroom. Should Hendrick ever need to hand over the reins to Hendrick Motorsports, Gordon is now next in line.

“I feel like I’m at the place in my life where I’m really ready for it,” Gordon said Sunday at Pocono Raceway. “I’m just really fortunate to work side-by-side with a guy that’s showed us all how to do it right for so many years, and will continue to do that for a number of years to come.”

Gordon is set take a daily role at Hendrick Motorsports as vice chairman and the second-ranking team official to the 71-year-old Hendrick. The move positioned Gordon to one day succeed Hendrick at the top of NASCAR’s winningest organization. He will formally begin the executive management role at the start of 2022.

Gordon, the four-time NASCAR champion and face of the series as it exploded in popularity in the 1990s, had an equity stake in Hendrick Motorsports since 1999 and his interest in the business side of the sport — topics ranging from the development of the new car to driver sponsorship — only grew, even as he called races in the Fox Sports booth.

“I realized this is where my true passion lies,” Gordon said. “I love the sport, I love racing. But the competition and being partnered with one of the best owners there ever will be in NASCAR, that’s really what I was getting excited about.”

Gordon’s final call in the Fox Sports booth was the one where he called it quits. He joined Fox in 2016 but maintained an active role with the team as Hendrick’s only partner in the 13-time championship organization.

Gordon said he knew this would be the last season he would serve as analyst.

“I really felt like the decision was made going into the season,” Gordon said. “I don’t think anything was going to change that. It became something that was a great transition for me to step out of driving.”

Gordon tried to balance his relationship with Hendrick and Fox while he critiqued the drivers he had working relationships with inside the organization. Led by Kyle Larson and Saturday’s Pocono winner Alex Bowman, Hendrick has won six straight Cup races headed into the second race of the weekend doubleheader.

Fox shares the NASCAR broadcast schedule and NBC Sports now has the rest of the season.

“As much as maybe there were those that criticized me, I think I worked extremely hard trying to separate those two,” Gordon said. “Which is why I purposely didn’t come to the haulers, didn’t spend as much time with crew chiefs and drivers the first half of the season. I tried to be respectful of what they were focused on and do my job in the booth the best I possibly could. But of course, it’s hard not to be biased when you have that kind of relationship. Even if I wasn’t still an equity owner at Hendrick, my entire career I drove for this organization.”

Gordon joined Hendrick Motorsports for the final Cup race of the 1992 season and launched one of the greatest careers in NASCAR history. He won 93 races — third on the career list — and four Cup titles before retiring in 2015.

As vice chairman and co-owner, Gordon will work daily with the team, focusing on the organization’s competition and marketing groups. He will report to Hendrick and work alongside president Marshall Carlson and general manager Jeff Andrews. Hendrick Motorsports launched in 1984.

“Jeff is super helpful. He gets it from an organizational side, he gets it from a race car driver side,” Bowman said. “I got to fly home from Raceway Park in Indianapolis, I guess two weeks ago with him now. That was really cool, to fly home with him and his parents, share old open-wheel racing stories. It’s been kind of cool to build that relationship with Jeff.”

NASCAR’s most successful owners are aging out of the sport — Joe Gibbs is 80, Jack Roush is 79, Richard Childress is 75 — and the 49-year-old Gordon is part of a new wave needed to sustain the legacy and longstanding success of their respective organizations.

“The health of the sport has to have owners that are looking long-term into the future,” Gordon said. “I feel like this move is exactly that for Hendrick Motorsports.”