NASCAR playoffs rained out for 3rd consecutive day at Texas 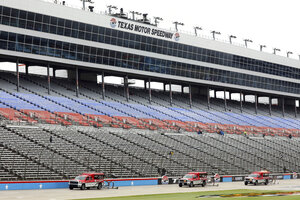 Drying trucks continue to prepare the track for a possible NASCAR Cup Series auto race at Texas Motor Speedway in Fort Worth, Texas, Tuesday, Oct. 27, 2020. The race was stopped on Sunday because of drizzle and misty conditions that allowed drivers to complete just 52 of 334 laps. Another 115 laps have to be completed to get to the halfway mark of 167 laps that would make Texas an official race. (AP Photo/Richard W. Rodriguez)

FORT WORTH, Texas (AP) — NASCAR will make a fourth attempt to complete its playoff race at Texas Motor Speedway on Wednesday after persistent mist and cold temperatures continued the long delay.

The race began Sunday and drivers completed 52 of the scheduled 334 laps before mist and drizzle halted the action. The weather did not relent on Monday or Tuesday as NASCAR spent about two dozen futile hours trying to dry the track.

The resumption of the race was set for Wednesday at 3 p.m. EDT at the Texas track.

Industry participants documented their boredom on social media: Ryan Blaney and Bubba Wallace played video games, spotters stuck in their rental cars used the horns to honk out “Jingle Bells,” and Joey Logano asked the track president if he could assist with the drying process.

“This is how crazy I am — I called Eddie Gossage and asked if there was anything I could do to help because I am that bored,” Logano said. “That is a really risky move if you guys know Eddie. I am willing to do anything at this point.

“I tried to get him to open the go-kart track and let us go play with those.”

Logano is the first of four drivers locked into the Nov. 8 championship-deciding finale and has used the idle time at Texas for lengthy discussions with his Team Penske crew on preparations for that Phoenix race. Logano earned his spot by winning last week at Kansas Speedway.

“We have been able to spend a lot of time with no distractions to really talk about Phoenix,” Logano said. “That is the advantage of winning the first race in the third round.”

Alex Bowman, one of seven other drivers attempting to advance to the championship round, got a run in at a gym located at the track and lamented his eating habits in the rain.

“I’ve had In-N-Out, pizza, so the diet is out the window,” Bowman said. “I’m out of food, out of clothes, out of everything.”

The Cup Series is scheduled to finalize the championship field next Sunday at Martinsville Speedway in Virginia. It is not clear how NASCAR may have to adjust scheduling based on the postponements in Texas.

The Truck Series and Xfinity Series are scheduled for Friday night and Saturday afternoon, and both series completed racing in Texas. The Cup cars aren’t scheduled to enter Martinsville until late Saturday night.

The bigger concern is likely the NBC production crews that must complete the Texas broadcast and then prepare Martinsville for Friday night’s Truck Series race.