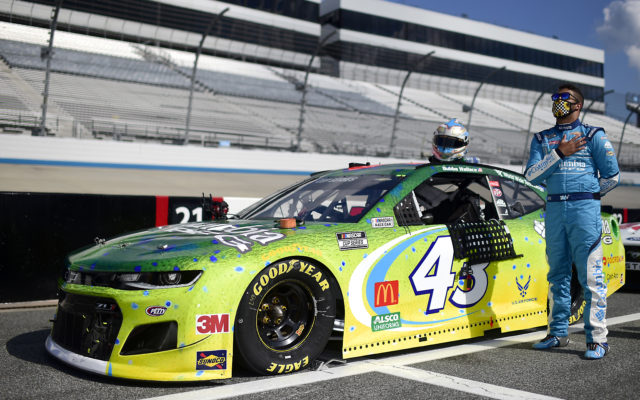 CHARLOTTE, N.C. (AP) — Major sports across North America ground to a halt in the wake of another police shooting of a Black man, this time in Wisconsin. Auto racing was not among them.

NASCAR drivers do not plan to skip Saturday night’s race at Daytona International Speedway to raise awareness of social and racial injustices. Bubba Wallace, the only fulltime Black driver in the elite Cup Series, said that decision should not be interpreted as “turning away from the dark and evil acts that have taken over our nation.”

The 26-year-old Wallace has been a leader in pushing NASCAR for more diversity and its recent ban on the Confederate flag at race tracks. His activism since George Floyd died while in police custody in Minnesota has made him a spokesperson of sorts for his peers on social issues, and he was the first driver to address any action potentially planned at Daytona.

“I hope you all understand that by us continuing to race this weekend, DOES NOT mean we are stepping down and turning away from the dark and evil acts that have taken over our nation,” Wallace tweeted. “Absolutely NOT!!! I can assure all of you that myself and many of my competitors are continuing to work hard with @NASCAR to continue the efforts and the fight for racial equality. Let’s stand or kneel TOGETHER and continue push for what’s right.”

The Milwaukee Bucks did not take the court for their NBA playoff game Wednesday night in protest of the shooting of Jacob Blake, a Black man, by police in Kenosha, Wisconsin. The NBA, WNBA and MLS called off games, the NHL postponed its playoffs for two days and some Major League Baseball teams refused to play.

Like NASCAR, other racing series pressed ahead this week, including IndyCar in Illinois and Formula One in Belgium, where six-time champion Lewis Hamilton — the only Black driver in F1 — said he had no plans to sit out.

“I know we are all planning on racing. Bubba supports that,” Daytona 500 winner Denny Hamlin said Friday. “I certainly think we need to continue our discussions about social and racial injustice, and we continue to educate ourselves. I certainly believe that we are moving the right way.”

Wallace also took umbrage at the suggestion that athletes avoid politics and “stick to sports.”

“I’m over hearing people say ‘leave politics out of NASCAR’ when they are the same damn ones that were drooling over the fact of the BIGGEST political person being at the Daytona 500 this year,” he wrote. “Same damn ones that love when the Trump car is on track.”

President Donald Trump attended the season-opening Daytona 500, mingled with drivers and team owners, addressed the crowd and gave the command to start the engines. The GoFas Racing team has also used a pro-Trump paint scheme on Corey LaJoie’s car several times this season.

Seven-time NASCAR champion Jimmie Johnson on Friday agreed with Wallace that athletes have “a right to share our opinion” on social matters. Johnson, Hamlin and Tyler Reddick said there have been discussions among drivers about a response to the Blake shooting.