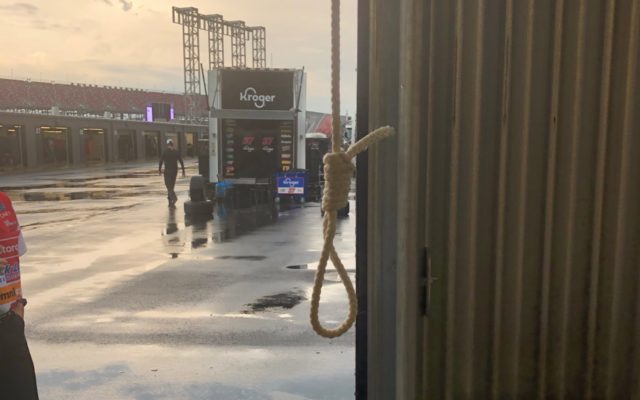 Image of the garage pull found at Talladega Superspeedway taken the afternoon of June 21, 2020. Photo: NASCAR

EDITOR’s NOTE: This story has been updated to include the findings of NASCAR’s investigation, which it released Thursday afternoon.

BEXAR COUNTY, Tex. (KTSA News) — NASCAR released a photo Thursday of the noose that was found in a garage at Talladega Superspeedway this past weekend.

The FBI investigated and determined that this noose — which was identified in the garage of the Richard Petty Motorsports #43 team — was not a targeted hate crime against team driver Bubba Wallace.  Instead, it had been there since the new garages were built last summer.

NASCAR said Thursday afternoon it finished its investigation into what happened at the garage stall.

“Upon learning of and seeing the noose, our initial reaction was to protect our driver. We’re living in a highly charged and emotional time. What we saw was a symbol of hate and was only present in one area of the garage and that was of the 43 car of Bubba Wallace,” NASCAR president Steve Phelps said. “In hindsight, I should have used the word ‘alleged’ in our statement.”

Phelps said the noose was real, as was the sanctioning body’s concern for Wallace.

NASCAR asked all of the tracks it goes to — many of them NASCAR itself owns — to look through all of their garages to see what pull down tethers they use.

Of the 1,684 garage stalls at the 29 tracks, only 11 had a pull-down rope tied in a knot and only one was a noose — the one found at Talladega Sunday.

“Bubba Wallace and the 43 team had nothing to do with this,” Phelps reiterated. “Bubba Wallace has done nothing but represent this sport with courage, class and dignity.”