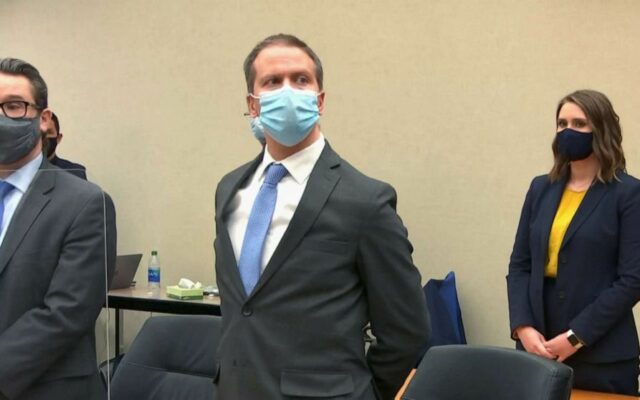 (MINNEAPOLIS) — People across the United States responded to the guilty verdict that was reached in the murder trial of former Minnesota police officer Derek Chauvin, who was charged in the death of George Floyd.

Chauvin was found guilty on all counts.

Here’s how the news is developing today. All times Eastern.

People gathered Tuesday afternoon outside of the Hennepin County Government Center and at George Floyd Square in Minneapolis to hear the verdict.

While some who were gathered were celebratory, others were tearful upon learning that Chauvin was found guilty on all of the counts against him.

Police departments across the United States have been bracing for this moment. A state of emergency was declared, and National Guard tro

As George Floyd’s family watched the verdict being read, they were overcome with emotion.

Bystander video footage shown in court showed Floyd talking about his family while laying on the pavement under Chauvin’s knee.

Ben Crump, one of the attorneys for George Floyd’s family that helped settle a $27 million civil lawsuit last month, called the Derek Chauvin case a “turning point in American history for accountability of law enforcement,” after the former Minneapolis police officer was convicted on all three counts in Floyd’s death.

“Painfully earned justice has arrived for George Floyd’s family and the community here in Minneapolis, but today’s verdict goes far beyond this city and has significant implications for the country and even the world,” Crump said in a statement. “But it does not end here. We have not forgotten that the other three officers who played their own roles in the death of George Floyd must still be held accountable for their actions, as well.”

Antonio M. Romanucci, another attorney on the legal team, said in a statement the verdict “reinforces significant police reforms underway in Minneapolis including use-of-force reporting, a requirement to keep body-worn cameras on, and a policy for officers to de-escalate non-threatening encounters by disengaging or walking away.”

He called on Minnesota state lawmakers to pass The George Floyd Arbitration Reform Bill, and for the United States Senate to pass the George Floyd Justice in Policing Act.

In March, Minneapolis’ City Council approved a $27 million settlement to the family of George Floyd.

Minnesota Gov. Tim Walz released a statement on Facebook after the verdict was read, calling it an “important step forward for justice in Minnesota.” However, he noted, the death of Daunte Wright on April 11 is a reminder that “our work has only begun.”

“A year later, Derek Chauvin has been found guilty of murder and faces years behind bars,” Walz wrote. “But we know that accountability in the courtroom is only the first step.”

“No verdict can bring George back, and my heart is with his family as they continue to grieve his loss. Minnesota mourns with you, and we promise the pursuit of justice for George does not end today,” he continued.

“True justice for George only comes through real, systemic change to prevent this from happening again,” Walz said. “And the tragic death of Daunte Wright this week serves as a heartbreaking reminder that we still have so much more work to do to get there.”