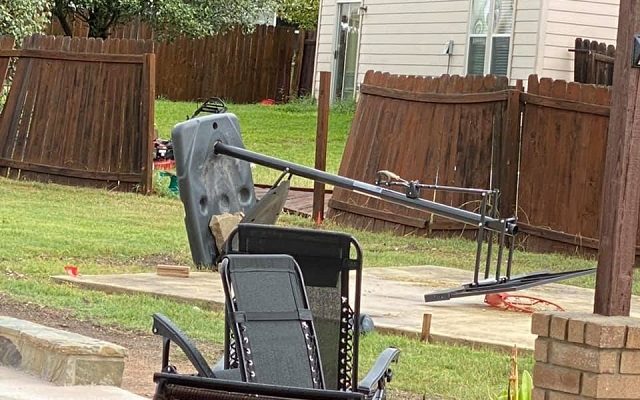 Virginia Mitzelman and her family live in that neighborhood and they gathered in a hallway away from the windows when the tornado warning was issued.  She said she had never experienced anything like that.

“Trees started to bend and it looked liked the tree in the front yard was going to snap,” she told KTSA News. “We lost power a couple of times and you really couldn’t see outside because it was so dark.”

She also described a horrible sound as if “the windows were screaming.”

“The wind was so strong you could hear the pressure against the windows,” Mitzelman said. “It sounded really ugly.”

Mitzelman said she just prayed that she and her family would be alright. They were unharmed, but they didn’t realize the extent of damage until Monday morning. Their fence was knocked down, lawn chairs were in the pool, the basketball goal and pot plans were damaged. Some of their property was blown across the street.   Mitzelman said those things are easy to fix, but she’s grateful her family was not hurt.

Neighbors are helping each other by returning things that were tossed around, and they’re posting on social media photos of items that landed on their property as they try to locate the owners.  The tornado tore a roof off a home about 2 streets away from Mitzelman’s home.

Platt says there were a couple of severe weather events going on at the same time. The investigation by the NWS Monday afternoon also showed some straight line wind damage on Talley Road in the far West Side.

“It was a pretty broad area of San Antonio that was impacted,”  said  Platt.

The investigation continues into the width and path of the EF-1 tornado in the Wildhorse neighborhood.   Could there have been more than one twister in San Antonio?

“We’re still looking at the data, but right now the only one that we can confirm is in the Wildhorse Subdivision.

Platt  was predicting more thunderstorms late Monday, but not as severe as Sunday night’s weather.  However, a Severe Thunderstorm watch continues until 4 a.m. Tuesday for San Antonio and areas west, northwest and south of us.  A flood advisory is in effect until 12:30 a.m. Tuesday.