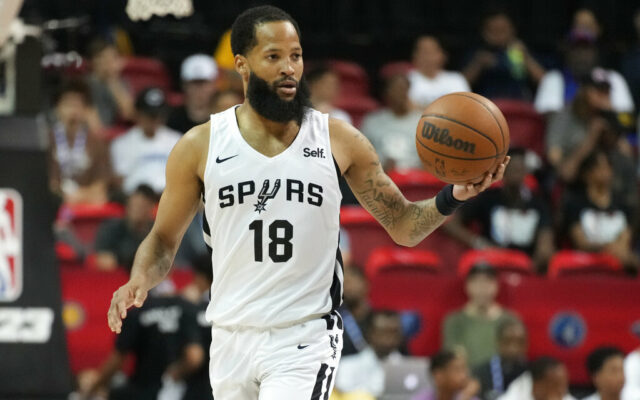 By mid-January, LeBron James could be the NBA’s scoring king.

The NBA schedule was released Wednesday, all 1,230 games that are set between Oct. 18 and April 9 taking place in four countries with Mexico and France playing host to regular-season contests along with the U.S. and Canada.

There are the usual highlights — Stephen Curry and Golden State will raise another title banner on opening night, as is the NBA’s customary perk for champions; a five-game slate of games on Christmas yet again; the traditional games in Atlanta and Memphis as part of the leaguewide commemoration of the life of Dr. Martin Luther King Jr. This year brought a twist, with Election Day now a newly created off day in the NBA.

And now that the list of games is out, the numbers show that James could catch Kareem Abdul-Jabbar in the final two weeks of January — assuming James doesn’t have to miss games and scores at his usual pace. James enters this season No. 2 on the all-time list, 1,325 points behind Abdul-Jabbar.

“We have obviously a very large ecosystem of league office staff, team staff, players, arena staff that are truly driving to this process,” said Evan Wasch, who, along with Gene Li and Tom Carelli, is on the NBA team of executives who build the schedule. “So, we are just one small piece.”

Wasch, Li and Carelli spent weeks putting a 1,230-piece jigsaw puzzle together, mindful of things like team wishes to have games on certain dates, total miles traveled, even carbon footprint.

The big headline from their work: Teams will travel a bit less, about 5% fewer miles in the air on average over last season.

Add it all up, and NBA teams will combine to fly about 50,000 fewer miles this season.

“There’s a player health component, and there’s also a sustainability component there,” Wasch said. “That’s a 5% decrease from where we’ve been. We’ll take it.”

Among the countless storylines entering the season is James, and his pursuit of more NBA history.

If he continues scoring at his typical pace — 27 points per game for his career, 30 points per game last season for the Los Angeles Lakers — he would need between 44 and 49 games to pass Abdul-Jabbar.

Games 44 through 49 for the Lakers fall in the second half of January. They happen to be at home for most of that stretch, a coincidence since it precedes the annual spot in the calendar where the Lakers and Los Angeles Clippers need to vacate their home arena while it gets ready to play host to the Grammy Awards.

Other revelations from the schedule:

Minimizing the instances of having games on back-to-back days is still a point of emphasis for the NBA, and the average number of them dipped another 1.5% this season — the average going from 13.5 per team last season to 13.3 per team this season.

No team has fewer than 12 back-to-backs this season. No team has more than 15.

If the Spurs’ game against Golden State that night draws at least that many fans, it’ll set an NBA regular-season record. The Spurs will play that game in San Antonio’s Alamodome, not their typical arena, and it’ll be set up to accommodate at least 65,000 fans.

The biggest crowd at an NBA regular-season game is 62,046, who gathered to watch Michael Jordan and the Chicago Bulls meet the Atlanta Hawks at the Georgia Dome on March 27, 1998.

The biggest crowd in league history was 108,713, that group gathering for the 2010 All-Star Game at the home of the NFL’s Dallas Cowboys in North Texas.

The NBA has scheduled 45 games that will be shown live in prime time across Europe, the Middle East and Africa on Saturdays and Sundays.

Some prominent NBA names missed the entirety of last season for a variety of reasons. Among those who were in that group and are expected back this year, assuming they’re ready to go when their teams play Game 1:

Kawhi Leonard and John Wall, now teammates with the Clippers, would open their season Oct. 20 — a “road” game against the Lakers.

Denver’s Jamal Murray would return Oct. 19 at Utah. Brooklyn’s Ben Simmons and New Orleans’ Zion Williamson also would be in line to come back Oct. 19 when the Nets host the Pelicans.