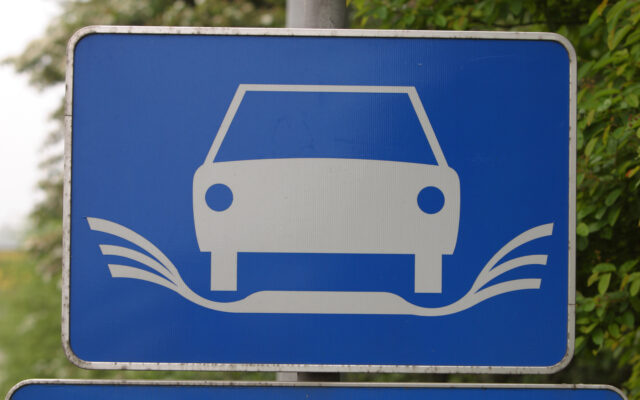 SAN ANTONIO (KTSA News) — Parts of Bexar County have seen almost 10 inches of rainfall since Sunday and the persistent rainfall is leading to waterlogged roadways and fast-moving creeks and rivers around the county.

National Weather Service Meteorologist Paul Yura said that almost 7 inches have fallen in part of the country since this morning and nearly 10 inches since yesterday afternoon. Yura said that some areas of the county are reporting barely an inch of rainfall in the same timeframe.

The heavy rains have led to Leon Creek rising more than 20 ft. since this morning and is currently cresting near 26 ft. The record height for Leon Creek is 29 ft.

Leon Creek at I35 is now near 26 feet and looks to be in the process of cresting. This would be the 4th highest crest for this location on record. pic.twitter.com/fGaj8DYKVB

The creek normally sits between one and two ft. deep and Yura said the rise is inevitable with the burst of heavy rain that west Bexar County received since last night. The creek should return to normal depth by tomorrow afternoon as the rainfall runs off towards the southeastern side of the county.

Reports of high water have been seen across the county including Olmos Creek and Huebner Creek, but the NWS does not have gauges in these waterways and was not able to provide those changes in depth.

Yura said the scattered thunderstorms in the forecast through next week will be concentrated more on the southern part of the state, unlike the moisture that has been sitting over San Antonio since the weekend and daytime heating can be the trigger for showers to develop quickly.

There is a chance that rain can fall in already affected areas and Yura said areas like Leon Valley and Helotes that are waterlogged will be more easily affected by a pocket of heavy rain.

“Everybody just has to stay aware, they have to be careful and of course remember the turn around, don’t drown slogan,” Yura said.