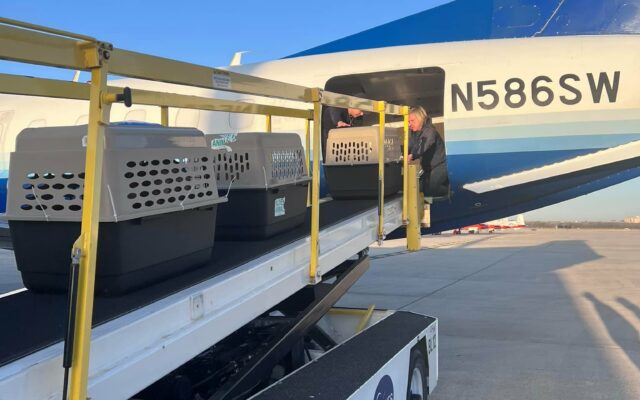 SAN ANTONIO (KTSA News) — Nearly 100 cats and dogs left San Antonio over the weekend in search of a forever home in the northeast.

The pets were transported on the rescue flight in partnership with the Bissell Pet Foundation to fill empty shelters in New York, New Jersey, Rhode Island and Connecticut.

Volunteers got to work around 5 a.m. to get the pets ready for the flight out of the San Antonio International Airport.

Animal Care Services spokesperson Lisa Norwood said they have worked in partnership with the Bissell Pet Foundation for years through Empty the Shelter events, but this was the first rescue flight the groups coordinated. The coordination took just over a month, while the groups coordinated with fosters and shelters to prepare for the travels that includes medical checkups and quarantining.

Norwood said ACS hopes this will be the first of many rescue flights between the groups.

The animals came from both the shelter and local foster families in an effort to make room for additional pets as Animal Care Services is experiencing the busiest intake season of the year.

Norwood said the mild winters that San Antonio generally experiences means that unspayed cats and dogs are procreating earlier and more frequently than animals in the northeast, which leads to San Antonio shelters filling up as early as January.

“I think what people are surprised to hear is that there are shelters in other parts of the country that not experience the level of animal overpopulation in their communities, and therefore sometimes have waiting lists for pets to get adopted in their respective areas,” Norwood said, noting many of these shelters also do not receive the numbers of puppies and kittens seen in areas like San Antonio.

There are already waiting lists for some of the transported pets at a number of the northeast shelters, Norwood said.

The ACS shelters were very full before the trip, Norwood said, and they remain full as ACS has continued to take in unspayed dogs and cats along with their litters.

“The pers keep coming in 365 days a year, 24/7,” Norwood said. “The rescue flights are one part of the solution, but the greater fix comes from the community itself.”

The key to fighting shelter overpopulation is for residents to keep pets on their property and to make sure that pets are spayed or neutered.

“At the end of the day, we just want our pets to find homes,” Norwood said. “And if that home is in Texas, fantastic. If those homes are in the northeast, that’s great as well. As long as we can find good homes for the pets we have in our care, we’re happy to put them on a flight to their forever home if that’s what it takes.”