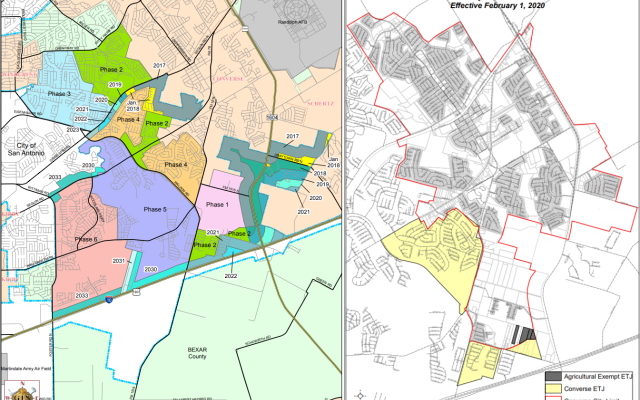 Left: Map displays Converse's overall annexation roll out, which includes a mix of border adjustments with the City of San Antonio and annexing land San Antonio will be releasing from its ETJ. Right: The current map of the City of Converse with its ETJ -- which the city is actively planning to annex -- highlighted in yellow. (Maps: City of Converse)

CONVERSE, Tex. (KTSA News) — The City of Converse is continuing forward with its annexation plan after reaching another benchmark at the start of the month.

Converse is set to annex the Dover and Parc of Escondido neighborhoods later in 2020, should the residents in those neighborhoods agree in the May 2nd election, as part of an agreement the City of Converse made with the City of San Antonio to turn over extraterritorial jurisdiction (ETJ) and some of its land to Converse over the next 13 years or so.

The City of San Antonio released its ETJ of Dover and Parc of Escondido on January 30th.

On February 1st, the Converse City Council made the following moves:

Friday, the city informed the residents that will be impacted by the annexation of the election, the services that would change following the annexation, and public hearing dates on the annexation.

Early voting on the annexation election will be from April 20th to April 28th.

This is part of the City of Converse’s annexation plan that will have its city limits extend west to Windcrest in the northwest and Foster Road in the southwest, and south to Interstate 10.

What changes after annexation?

Specifically in Converse’s case and the annexation of the Dover and Parc of Escondido neighborhoods, the following changes will be seen: