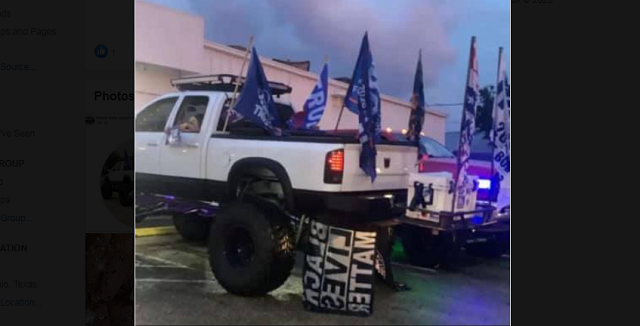 SAN ANTONIO (KTSA News) -The mayor of New Braunfels has responded to complaints about the  Trump Train that’s been traveling around the city on Thursday evenings.   A photo of a truck dragging a Black Lives Matter flag circulated on social media and stirred up a controversy following the event last week.

Bishop Michael Franklin, president of the Martin Luther King Association of New Braunfels, told KTSA News that dragging the BLM flag is a reminder of the murder of James Byrd, Jr. who was dragged for three miles behind a pickup by white supremacists in 1998 in Jasper, Texas.

“Dragging that Black Lives Matter flag, as well as shouting out racial slurs from the back of pickup trucks was very, very disturbing,” said Franklin.

“In recent days, New Braunfels has experienced divisiveness. Some members of our community have felt attacked, demoralized, misunderstood, and concerned. This is not the New Braunfels that I know and love, ” said Brockman.

He says organizers started the weekly event as a patriotic demonstration supporting President Trump, but it has grown significantly.

“Some images and social media posts associated with the demonstration have caused angst and uneasiness in our community,” said Brockman. “The organizers of the Trump Train NB have assured me that the individuals in those photos and making those social media posts are not affiliated with their organization and that anyone who joins the organization with the purpose of spreading a message of hate is not welcome.”

The mayor said individuals and groups have a right to freedom of speech and to peaceably assemble, but it should be done in a lawful and respectful manner.

“I do not condone any activity, symbolism, speech, or imagery with overt or implied racism or hatred. We take these matters very seriously and will not turn a blind eye to issues that make our residents feel threatened or afraid,” said Brockman.

In addition to the organizers of the Trump Train NB, Mayor Brockman also met with city leaders and is working with the Martin Luther King Association and non-profit organizations “to ensure our community continues to be includes, supportive and collaborative.”

He says the New Braunfels Police Department will continue to provide a presence at these events to ensure safety and security for participants of the demonstrations, as well as bystanders.

SAN ANTONIO (KTSA News) -The Trump Train is gaining steam in New Braunfels, but a recent image circulating on social media has created a controversy.   It shows a truck dragging a Black Lives Matter flag under the pickup.  The image is a screen grab taken from a Sept. 3 Trump Train video that has since been removed from YouTube.

A  photo posted on Ruona Nails’ Facebook page shows a man standing behind the truck wearing a black “Donald Trump Matters” t-shirt. The post reads,”We are ready!! Taking them all off the truck and putting them on the boat.  The BLM and Antifa (flags) are on there to drag on the ground and upside down…”  The man is posing with two young children, one of them holding a Trump sign.

Some of the people commenting on Facebook say dragging the Black Lives Matter flag is a reminder of the murder of  James Byrd Jr., an African-American, who was dragged by three white supremacists for three miles behind a pickup truck in 1998 in Jasper, Texas.

Bishop Michael Franklin, president of the New Braunfels Martin Luther King Association wants the city  to place some restrictions on the Trump Train.

In a Facebook post, Franklin said “acts of racism” by some of the participants “threaten the very fiber of our community’s peace and safety.”  He urged members of the Martin Luther King Association to “remain decent and orderly,” and he reminded them of the words of Dr. King:   “The ultimate measure of a man is not where he stands in moments of comfort and convenience, but where he stands at times of challenge and controversy.”

Bishop Franklin urged supporters to “remain steadfast and unmovable in efforts to make a difference within our community regardless of the demeaning behavior of others.”

Trump Train participants gather on Thursday evenings at the Creekside shopping Center on IH 35 near FM 306.  They pray before taking off and driving around the city of New Braunfels.

The online newspaper MyCanyonLake.com quotes a resident on Common Street who says the cheering and the honking wakes their baby.  He says there are hundreds of vehicles and some of the horns are modified to sound like train whistles.

According to the newspaper, a police officer says the Trump Train isn’t considered a parade, so organizers don’t need a permit.   As long as they obey traffic signals and traffic codes, they’re not violating any laws.   A councilman tells MyCanyonLake.com that the First Amendment guarantees free speech.

According to MyCanyonLake.com, the Trump Train participants won’t drive around the city this Thursday.  Instead, they’ll gather at at the downtown plaza area to show support for a Republican fundraising event at the New Braunfels Convention Center featuring keynote speaker and former congressman Trey Gowdy.

Trump Train New Braunfels Texas last night, they STOPPED in RESPECT and HONOR of our National Anthem!! Proud to be a TEXAN!!!