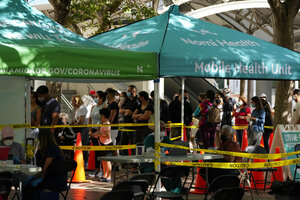 CHICAGO (AP) — More than a year after the vaccine was rolled out, new cases of COVID-19 in the U.S. have soared to the highest level on record at over 265,000 per day on average, a surge driven largely by the highly contagious omicron variant.

The previous mark was 250,000 cases per day, set in mid-January, according to data kept by Johns Hopkins University.

The fast-spreading mutant version of the virus has cast a pall over Christmas and New Year’s, forcing communities to scale back or call off their festivities just weeks after it seemed as if Americans were about to enjoy an almost normal holiday season. Thousands of flights have been canceled amid staffing shortages blamed on the virus.

The number of Americans now in the hospital with COVID-19 is running at around 60,000, or about half the figure seen in January, the Centers for Disease Control and Prevention reported.

While hospitalizations sometimes lag behind case numbers, the figures may reflect not only the protection conferred by the vaccine, but also the possibility that omicron is not making people as severely ill as previous versions.