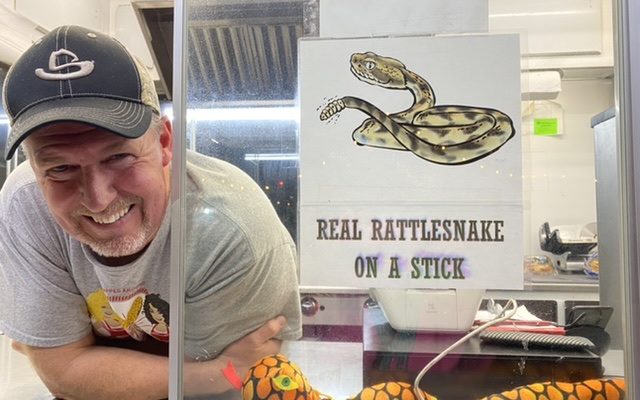 SAN ANTONIO (KTSA News) – A new item this year at the San Antonio Stock Show and Rodeo Food Court could get you all rattled. It’s a rattlesnake sausage on a stick.

“Yes, it’s real rattlesnake meat made into a delicious sausage,” said Chris Taylor. “We add seasoning, a little bit of spice, and we cook it with white wine for a mellow flavor instead of tasting gamey.”

He says it’s USDA-certified rattlesnake meat, so don’t worry. It has no venom.

“No, that would cost extra,” he joked.

Are people just buying it out of curiosity, or do they really like it?  Taylor says he has a lot of repeat customers, like Laura Medina’s 11-year-son.

“We came earlier this week and my son tried the rattlesnake sausage. He really, liked it,” said Medina.

He liked it so much that he made his parents walk from the carnival area near the AT&T Center to the Food Court, which is west of Freeman Coliseum to get another one on their second visit to the rodeo grounds.

“I told him he could have a burger, hot dog, nachos, or onion rings, but no, he had to have another rattlesnake sausage on a stick,”said Medina.

A man who was visiting the rodeo grounds with his family didn’t hesitate to plunk down a $10 bill for the exotic food item.  He was no stranger to rattlesnake dishes.

“I’ve skinned rattlesnakes and cooked them on my barbecue grill at home,” he said.