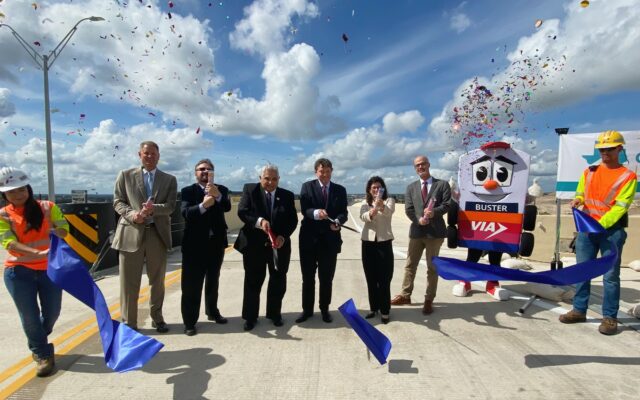 SAN ANTONIO (KTSA News) — VIA Metropolitan Transit and the Texas Department of Transportation wrapped on the first phase of the US 281 North Expansion today.

Bugg said Highway 281 between Loop 1604 to Stone Oak Parkway is the most congested choke point in the city. More than 91,000 drivers commute on US 281 North each day.

“The rapid growth happening along the US 281 North corridor is driving the growth in our region and the need for more and better transportation options, which this partnership project provides,” Arndt said. “HOV lanes offer an alternative to idling in traffic, support transit-oriented communities and economic development, and help keep SA moving. That’s always the goal.”

The first phase of the project was completed in four years. The second phase will expand 281 all the way to the Comal County line and is expected to finish by 2023.

“I know four years sounds like a long time,” Bugg said. “But in transportation, it’s kind of like dog years — this is actually very rapid.”

Bugg said TxDOT is working to alleviate the congestion on the northside of the city between the project being celebrated today and the Loop 1604 expansion project that broke ground last month.

“Today is a big day for San Antonio,” Bugg said. “We’re delivering $228 million of transportation improvements that will improve traffic flow and address congestion where it’s needed the most.”

The U.S. 281 North Expansion Project is part of $7.2 billion worth of infrastructure projects planned for the San Antonio metropolitan area. Bugg said the state has earmarked more than $26 billion for work across the Lone Star state with a focus on the five major metropolitan areas that includes San Antonio, Houston, Austin, Dallas and Fort Worth.