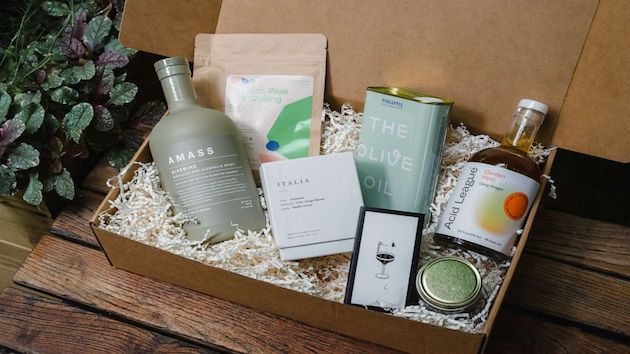 (NEW YORK) — Adding items to a cart, shipping and restocking the kitchen can feel a bit monotonous. But thanks to Foxtrot Anywhere, a marketplace with a range of grocery and pantry products from new food entrepreneurs, it’s easier than ever to break free from a re-order rut and shop expertly curated selections.

A new era of trendy consumer product goods, especially in the food and beverage space, command attention for authenticity, diversity and quality both in ingredients and the story behind the people making them.

From stocking and supporting women-owned olive oil companies and Persian Ajil trail mix brands to a Brooklyn-based hot sauce line made by a Barbadian American drag queen, Foxtrot Anywhere puts global flavors on the map in more ways than one.

Originally launched as a brick-and-mortar reinvention of a neighborhood corner store with locations in Chicago, D.C. and Dallas, Foxtrot Anywhere now offers unique locally made and sourced goods online for nationwide delivery.

To kick off their new tastemaker series, the company tapped food expert Nilou Motamed to curate boxes that include her must-have picks like women-founded alcohol-free botanical spirits and ethically sourced Chinese teas.

“What they’re doing is a great disruption story. It’s a great evolution of how we consume,” she told “GMA” about Foxtrot’s business model that identifies and promotes new makers to give consumers access to what’s new. “It’s so important for us to understand eachother’s food as a way of understanding each other — it feels so good to be in this moment in our food culture where we can open people’s eyes to the bigger world out there — spotlight flavors from Israel, Tunisia, [Barbados] — we have an opportunity to let them be heard.”

A judge on TV shows “Top Chef” and “Chopped” and the former editor-in-chief at Food & Wine magazine, Motamed said putting together these boxes was particularly rewarding, especially with her intrinsically hospitable nature.

“Creating community around food is really important — so for me to be able to curate an aisle and talk about my favorite things, to turn people on to new products that they might not be aware of and have a dialogue with people at Foxtrot to bubble up the best things they have to know about and be able to deliver it to them in this big moment is so fun.”

The self-proclaimed “obsessive gifter” said she has always enjoyed creating boxes of treats representative of the person she’s giving it to.

Whether it’s a hosting or housewarming gift, Motamed shared her favorite Foxtrot brands, including: “New York Shuk, a Moroccan harissa paste made by a Brooklyn-based couple that I have in my fridge, it’s such a good product and I think a lot of people don’t know about it; Frankie’s 457, which happens to be where I ate all my early post-lockdown meals, and the olive oil is a signature there and that’s on my kitchen counter, so that olive oil is in one of my boxes; [and] Diaspora, which is a female-owned fair trade spice company.”

“There’s such a powerful force for diversity and female empowerment — and each of these boxes is like my big hug to these hard-working artisans who make our lives more joyful,” Motamed said.

Motamed “worked very hard” with Foxtrot to bring back experiential joy of discovering new products to an online platform, using evocative descriptions since shoppers don’t have the benefit of tasting or smelling.

“There’s so many things coming at us,” Motamed said, “it’s hard to know who to trust and where to spend your money. Because products are so well made and in small batches, we want to make sure that when you get it home that you feel as good as you did in the moment. It’s full of craft, everything feels like it’s part of a joyful exploration of the best things happening in the food space.”

Niloofar Mirani founded Ajil trailmix inspired by her father’s Persian cooking, which is also vegan, gluten- and sugar-free. [It’s] “what every Persian family has in their house — it’s salty-sweet with cashews and plump raisins,” Motamed described of the product that she felt particularly connected to as an Iranian immigrant. Mirani spent a year with her father sourcing the highest quality nuts and dried fruit and perfecting their ratios in each bag, Motamed said.