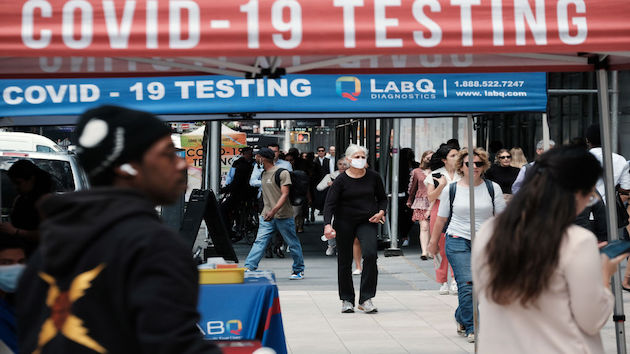 NEW YORK, NEW YORK - MAY 17: People walk past a Covid testing site on May 17, 2022 in New York City. New York’s health commissioner, Dr. Ashwin Vasan, has moved from a "medium" COVID-19 alert level to a "high" alert level in all the five boroughs following a surge in cases. (Photo by Spencer Platt/Getty Images)

The treatments, which are provided free of cost, are available at three sites. The program will expand to a total of 30 sites by the end of July. The select testing sites are managed by the New York City Test & Trace Corps.

Clinicians will provide the treatment at the sites, which are currently located outside of local pharmacies to allow for the distribution of the medication.

The program launch comes as the city’s COVID test positivity rate is above 10% for the first time since January. The number of positive cases has also risen 10% from just two weeks ago, according to data from the city’s Department of Health and Mental Hygiene.

Experts previously suggested the true test positivity rate could even be higher due to the number of people testing positive with at-home rapid tests.

This is a trend seen on the national level as well. According to data from the Centers of Disease Control and Prevention, as of June 26, the seven-day average for the COVID test positivity rate in the United States was 15.65%, the highest figure recorded since Feb. 3.

The average number of daily COVID-19 related deaths has risen to over 300. The U.S. was reporting just over 2,700 deaths every day at one point in February.

“COVID is a formidable opponent,” New York City Mayor Eric Adams said at a press conference Thursday. “It pivots and shifts and we are clear that we are going to pivot and shift with it and we are leading the way in the country on how we utilize all of our assets to address this serious crisis that we have faced and that we cycle out of.”

The city has already been offering home delivery for city residents who receive a prescription for antiviral medication.

“We were the epicenter of the COVID pandemic at the start, but we’re leading the way [with] prevention and mitigation,” Adams said. “We are now leading the way again by having this mobile unit. This new public health service will help all New York to get access to life saving treatments.”

Equitable access to Paxlovid remains a significant issue across the country, noted Jha.