No marching bands, but plenty of COVID-19 protocols at Alamo Bowl 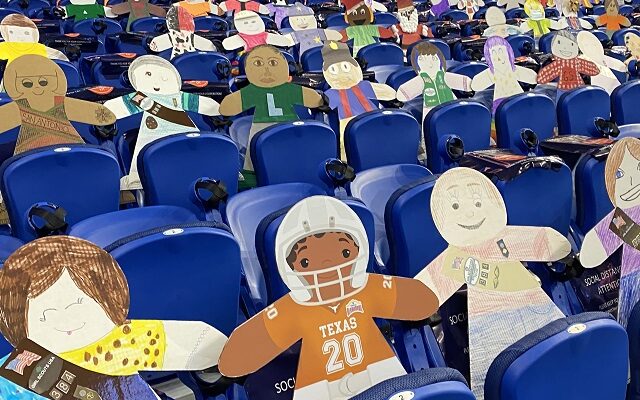 SAN ANTONIO (KTSA News) – The Texas Longhorns are here, but the 375-member Showband of the Southwest won’t take up the entire field at the Alamodome during the Valero Alamo halftime show.  The band is staying home because of COVID-19.

“No bands this year.  That’s just the conference procedure and protocol throughout the course of the season, so most conferences didn’t have bands.  They certainly didn’t travel,” said Alamo Bowl President/CEO Derrick Fox.

The venue can accommodate up to 65,000 people, but this year, there won’t be more than 11,000 fans allowed.   Fox says attendance is limited to 17 percent capacity because of the pandemic.  That’s a big economic hit, not only for the organizers, but for the city of San Antonio.  The Alamo Bowl usually attracts tens of thousands of visitors from outside the city and state.

“It’s a different financial model this year. We worked with the conferences to come up with a model that makes sense for everybody,” said Fox.

Fans will notice a lot of changes, starting with signs posted outside the facility with information on COVID-19 protocols, including temperature checks at the entrance.  Anyone with a temperature above 99.6 will not be allowed into the Alamodome.   They’ll be sent to a tent for a second screening, and if they’re still above 99.6, “they’ll be given some information on where to get tested for COVID-19 and they’ll be given written instructions on how to get a refund for their ticket and their parking,” said Alamodome Manager Stephen Zito.

There’s also a strict mask requirement, except when eating or drinking at your seat.  The ushers will be watching fans to make sure they’re wearing face coverings, and if they’re not, the ushers will issue warnings.

“If there’s any type of  confrontation, we’ll call Code Compliance officers and they’ll explain the policy,” said  Zito. “If at that point, the person refuses to put the mask on, there will be a written citation and they’ll be ejected out of the building.”

Hand washing and hand sanitizing stations are placed outside and inside the facility.   Most of the tickets are contactless.   Ticket scanners are placed at the entrances and you’re encouraged to use a mobile app to order your food.  You can pick up your food or beverage at the express lines, and if you insist on getting your food at concession stands, plexiglass will separate you from the cashier.

Patricia Musquiz-Cantor, director of Convention and Sports Facilities, says they used $1 million from CARES Act funds sent to the city to make improvements at the Alamodome to adhere to coronavirus protocols.

There will be no tailgating and seating at the dome is set up to ensure that various groups are at least six feet apart.

“There are four seats between each of the parties, which equates to about  6 feet of social distancing,” said Cantor.

The Alamodome has  hosted a total of 20 events at the Alamodome, including six UTSA games, so they’ve had plenty of practice working around the COVID-19 protocols.

“The game plan is already in place and it will be very successful,” said Fox. “If people are sick, they should stay home, and keep in mind, people are opting to come.  They don’t have to come.”

For more information on the safety measures, click here.

The Texas Longhorns and the Colorado Buffaloes will kick off at 8 pm Tuesday at the Alamodome.