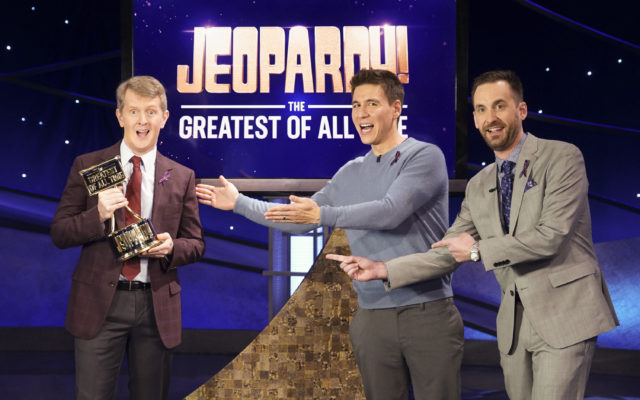 JEOPARDY! THE GREATEST OF ALL TIME - On the heels of the iconic Tournament of Champions, ÒJEOPARDY!Ó is coming to ABC in a multiple consecutive night event with ÒJEOPARDY! The Greatest of All Time,Ó premiering TUESDAY, JAN. 7 (8:00-9:00 p.m. EST), on ABC. (ABC/Eric McCandless) KEN JENNINGS, JAMES HOLZHAUER, BRAD RUTTER

NEW YORK (AP) — Here’s one thing “Jeopardy!” fans can bet on after a gripping “Greatest of All Time” tournament: there won’t be a rematch.

“I’m out,” said Ken Jennings, the veteran who beat young hotshot James Holzhauer and Brad Rutter to take a $1 million prize in the tournament that stretched out over four entertaining nights on ABC’s prime-time schedule.

Jennings was the first to win three matches, while Holzhauer won one and Rutter none. Jennings won Tuesday’s broadcast when, with the game on the line, Holzhauer whiffed on a question about Shakespearean dramas.

Jennings, who established himself in “Jeopardy!” lore by winning a still-record 74 games in a row in 2004, said in an interview with The Associated Press on Wednesday that he’s starting to feel his 45 years when it comes to high-stakes competition.

“I’m really happy to get one last hurrah,” he said, “but I don’t think I can top this. At some point (host) Alex (Trebek) is going to retire and I can’t ever see playing with a different host, quite honestly. It wouldn’t be the same.”

That has to be bad news for ABC, which saw the tournament become a hit. The first three matches all reached around 15 million viewers last week before Tuesday’s match slipped to 13.5 million, the Nielsen company said. A four-day break may have slowed momentum.

A series of second-place finishes in “Jeopardy!” tournaments through the past few years motivated Jennings this time around.

“It’s a sports cliche, but I almost wonder if I wanted it more than the other two did,” he said. “I got a lot of breaks. I ended up playing better than I thought I would, but honestly, I just wanted to win.”

To beat Holzhauer, a 36-year-old professional sports bettor, he had to play Holzhauer’s style.

“I had looked at so much tape of James trying to figure the guy out and the only way to beat James is to become James,” he said. “You have to not be intimidated by his shock and awe approach to the game and you’re going to have to do it, too: hop around for the Daily Doubles, bet big at every opportunity. It just shows what a dominant player he is.”

It was admittedly stressful, and he was uncomfortable at first making the type of wagers Holzhauer would traditionally make to pummel his competitors into submission.

“As it went on, you can see the dark side seducing you,” he said. “It gets easier and easier every time to become a James Holzhauer-style Las Vegas gambler. I’m glad the tournament ended when it did before I totally split into Vegas-style depravity.”

Twice in Tuesday’s first game, he bet everything on Daily Doubles and won. Finally, with 32,800 points on the line in Final Jeopardy, he also put all his chips on the table for a question about Grecian geography. When he answered correctly, Holzhauer made a bowing motion in his direction.

Holzhauer picked up steam in the second game, and had a lead going into the Final Jeopardy question, about which non-title character in a Shakespeare drama had the most speeches.

Second-place Jennings answered correctly (Iago), but strategically bet nothing because he knew Holzhauer would wager a large amount. He did, but answered incorrectly.

“I think James had swung the momentum in that last game and if he had gotten that Final Jeopardy (clue) and forced a (fifth match), I think he would have had a very good chance. I was very lucky to be able to finish when I did.”

Trebek watched admiringly from the podium.

“As I said at the end of the competition, it’s taken 15 years to get people to stop wondering how good Ken Jennings really is,” he said. “In the ‘GOAT’ tournament, he showed everyone that he had developed a calm style, delivered with knowledge, and change in betting tactics and an improved signaling-in capability. It was fun to watch and be a part of.”