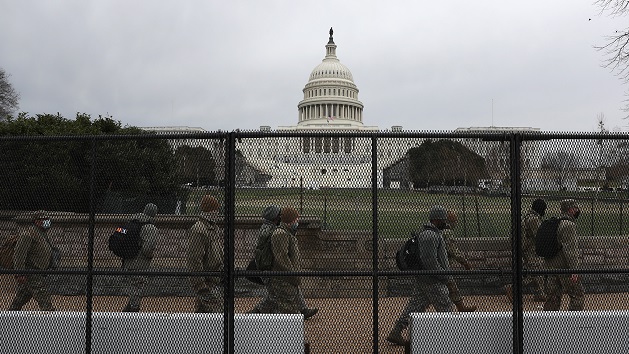 WASHINGTON, DC - JANUARY 08: Members of the D.C. National Guard walk behind a fence placed around the U.S. Capitol building on January 08, 2021 in Washington, DC. Democratic congressional leaders threatened to impeach President Donald Trump for encouraging a mob that stormed the Capitol Building on Wednesday. (Photo by Joe Raedle/Getty Images)

(WASHINGTON) — Security measures have been sharply stepped around the U.S. Capitol in the aftermath of the violent assault by a pro-Trump mob Wednesday, including a large National Guard presence and high, non-scalable fencing.

The National Guard will deploy over 6,000 guardsmen to the city by the weekend and will finish setting up the 7-foot-tall fencing around the Capitol, Army Secretary Ryan McCarthy said.

Some of the additional troops were already going to be arriving in D.C. to assist with President-elect Joe Biden’s inauguration, as has happened in the past.

A defense official told ABC News that their arrival has been accelerated and that they will be on month-long deployments to help out with the current situation and continue on through the inauguration and possibly beyond.

The non-scalable fencing will snake around the Capitol complex from Constitution Avenue, Independence Avenue, and First Ave to the front of the Capitol pond. The army secretary said the fencing will be up for the next 30 days.

Much of the area inside the fencing remains damaged from Wednesday’s violent insurrection, which left five dead, including a Capitol Police Officer. Structures set up ahead of Biden’s Inauguration on Jan. 20 remain visibly damaged disfigured on the building’s West Front, where rioters climbed scaffolding and bleachers set up for the event.

The increased measures come after intense bipartisan criticism of lapses in Capitol security Wednesday, when rioters overpowered police and forced their way into the building.

“I’m livid about the whole thing because I had conversations with the sergeant at arms and the chief of the Capitol Police, assurances that every precaution was being taken, that we had enough manpower – that we were going to keep people completely away from the Capitol,” Rep. Tim Ryan, D-Ohio, told reporters Thursday.

“We were told no one was going to be anywhere close to the Capitol, and the protests. And next thing you know, you turn on the TV, and they’re swinging from the Capitol building with flags,” he added.

Key Capitol security officials – including the Capitol Police chief and House and Senate sergeants-at-arms have resigned in the aftermath of the protests.