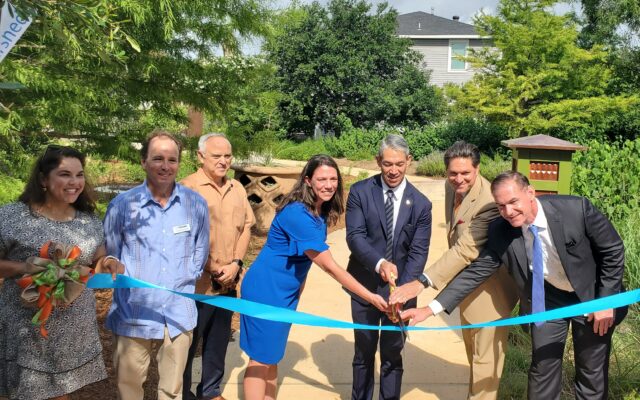 “For the Government of Mexico, it is crucial to strengthen trilateral cooperation between Canada, the United States, and Mexico. Our three countries are more than just neighbors; we are partners, allies, and, above all, friends,” said Consul General Rubén Minutti Zanatta. “If we continue working together, boosting cooperation, both at the federal, and especially, at the local level, engaging cities, towns, counties, and communities of all kinds, we will ensure the protection of our shared environments, our biodiversity, and wildlife.”

The pollinator garden is designed to be a cozy stop for Monarch Butterflies as they migrate to-and-from Mexico up to Canada, giving them a place to mate and lay eggs on milkweed, birthing a new generation of caterpillars that will eventually turn into butterflies. The garden is a host to more than milkweed, though, and serves as a habitat for many other pollinators and migratory species.

“The Consulate General of Canada in Texas is proud to have played a role in conceiving and supporting the North American Friendship Garden, a great symbol of the commitment of the people of Canada, Mexico, the United States, and San Antonio to preserve and protect the flyways of the Monarch Butterfly and other pollinators and birds that link all of us throughout North America,” Dr. Rachel McCormick, Consul General of Canada, said.

Confluence Park is part of Mission Reach, an eight-mile stretch of the San Antonio River that winds past four Spanish Missions that has been transformed by the addition of recreational and educational opportunities over the last decade with a focus on environmental restoration.

“The Mission Reach of the San Antonio River Walk is a shining example of urban ecosystem restoration that was made possible through the successful collaboration of multiple entities and the North American Friendship Garden is yet another example of the great things that can be accomplished when we all work together for a common goal,” said River Authority General Manager Derek Boese. “We are excited for the public to learn about the important role pollinators play in our environment which we hope will inspire them to become good stewards for our creeks and rivers.”