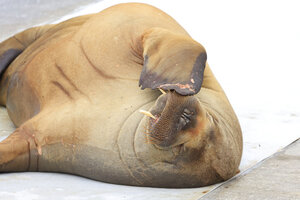 A walrus named Freya at the waterfront in Frognerstranda in Oslo, Norway, Monday July 18, 2022. Authorities in Norway said Sunday, Aug. 14, 2022 they have euthanized a walrus that had drawn crowds of spectators in the Oslo Fjord after concluding that it posed a risk to humans. (Tor Erik Schrøder/NTB Scanpix via AP)

COPENHAGEN, Denmark (AP) — A private fundraising campaign is underway in Norway to erect a statue of a walrus that drew crowds of spectators but was euthanized Sunday after authorities concluded the massive marine mammal posed a risk to humans.

Known affectionately to fans as Freya, the walrus became a popular attraction in the Oslo Fjord in recent weeks despite warnings from officials that people should refrain from getting close and posing for pictures with the animal.

“The shooting of Freya has a strong negative signal effect that we in Norway, and especially Oslo, are not able to provide living space for wild animals,” the citizens’ group behind the online fundraising drive said in its appeal.

“By erecting a statue of the symbol Freya quickly became, we will always remind ourselves (and future generations) that we cannot or should not always kill and remove nature when it is ‘in the way,’” the appeal continues.

As of Tuesday afternoon, the group has raised 156,409 kroner ($16,143), according to the fundraising website. Organizers said if they fail with the project, the funds would go to the local chapter of World Wildlife Fund.

Walruses are a protected species, and as recently as last month, officials said they hoped Freya would leave of her own accord and that euthanasia would be a last resort. The head of Norway’s Directorate of Fisheries said Sunday that they considered moving the animal elsewhere but concluded it wasn’t a viable option.

Atlantic walruses normally live in the Arctic. It is unusual but not unheard of for them to travel into the North and Baltic Seas. Another walrus, nicknamed Wally, was seen last year on beaches and even a lifeboat dock in Wales and elsewhere.

Freya liked to clamber on top of small boats, damaging them.

The Norwegian Veterinary Institute said Tuesday that it had received the body of the 600-kilogram (1,320-pound) female walrus and would carry out a necropsy for scientific purposes.